Medal of Honor Back from Space 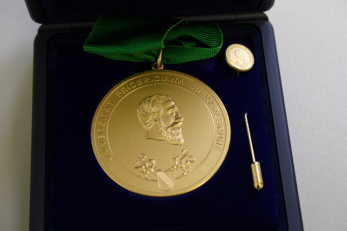 To the ISS and back. The medal of honor of the Universität Karlsruhe.
(Photo by: Gabi Zachmann)

A medal of honor of the Universität Karlsruhe (TH) that was taken along by ESA astronaut Hans Schlegel on his flight to the International Space Station ISS in February this year will return to the Fridericiana. The German astronaut will hand the medal over to the President of the university, Professor Horst Hippler, during a reception on Monday, November 24, 13.30 hrs, at the Senatssaal (building 10.11). In his short report “Columbus: Realization of a Vision”, Schlegel will speak about the significance of the European space research laboratory.

The medal, small and light enough for this extraordinary travel, accompanied Schlegel in order to return to the university as a special souvenir of the Columbus mission. “It is a custom in astronautics to take along memorabilia”, says Professor Sigmar Wittig from the KIT Institut für Thermische Strömungsmaschinen (ITS). The former president of the Universität Karlsruhe was Chairman of the Executive Board of the German Aerospace Center (DLR) and Chairman of the European Space Agency (ESA) when Hans Schlegel was appointed to fly to the ISS.

“I was very happy about Schlegel becoming our Columbus astronaut, because docking of the research laboratory to the ISS was a special event for Germany”, underlines Wittig. The Federal Republic of Germany paid 42% of the European costs of the space station. According to Wittig, the research laboratory ensures permanent European presence on the ISS. “I am very glad that we are in a position to largely promote European research in space and I hope that apart from fundamental research also application-oriented technical research in the fields of materials sciences and medicine, for instance, will play a role”, says Wittig, who is presently continuing to lecture and conduct research at the Fridericiana after his retirement. As capsule communicator, Schlegel is currently working as a non-flying astronaut of NASA at Houston and maintains communication between the colleagues on the ISS and the ground station.

Journalists are cordially invited to attend the reception.