Talents for the Optics Industry

The Federal Republic, Federal States, and Industry Are Funding Two International Masters’ Studies Courses – Among Them, Optics and Photonics at Karlsruhe 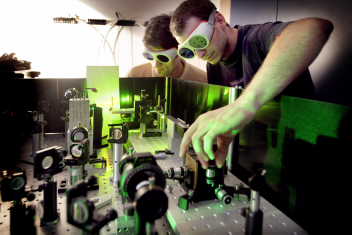 The Karlsruhe School of Optics and Photonics (KSOP) of the Karlsruhe Institute of Technology (KIT) extends its international masters’ studies course. With the help of additional funds provided by the Federal Republic of Germany, Federal states, and enterprises, the KSOP will increase the number of university places by 50%, improve the equipment of the laboratories, and increase the staff supporting and supervising the students.

To win talented skilled employees, the Federal Ministry of Education and Research (BMBF), together with enterprises working in the field of optical technologies, has decided to fund two international masters’ studies courses: Photonics at Jena and Optics and Photonics at Karlsruhe. Until 2012, the BMBF will supply a total of EUR 3.8 million for scholarships of students. The universities and the federal states of Baden-Württemberg and Thüringen will pay a share of two millions. Enterprises will contribute about EUR 1.7 million over the complete duration. About half of the funds will go to the KSOP. The scholarships for students amount to EUR 9.600 per year for a maximum of two years. Commitment of industry is controlled by a committee, in which the enterprises of the branch are represented.

At the KSOP, a total of 100 students mainly from European countries will pass the masters’ studies course of two years duration in the English language over the next four years. The program addresses applicants holding a bachelor degree in natural or engineering sciences. A commission of scientists awards the scholarships “to the best international students”, says Dr. Judith Elsner, Director of the KSOP. According to her, the number of students holding a bachelor degree in Germany is still small, which is why it will be so important to win students from abroad in the coming two to three years.

The masters’ studies course at the KSOP qualifies for a career in industry or research. Its major elements are the acquisition of experience in industry during an internship of eight weeks and a specialization in the second year. The school that was part of the Concept for the Future with which the Universität Karlsruhe succeeded in the Excellence Initiative launched by the Federal Republic of Germany and the federal states started in early 2007 already. “Our program is now fixed”, explains Judith Elsner, “now, the school can easily and rapidly use the additional funds for the extension of the studies course”.