KIT Students Win the Postbank Finance Award: EUR 30,000 for Their “Lessons from the Financial Crisis” 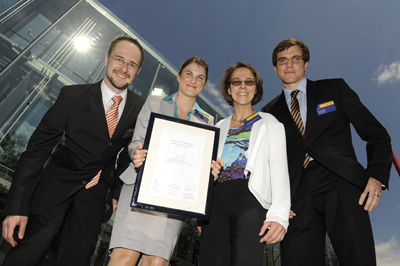 Jasmin Berdel, Daniel Müller, and Florian Stegmüller have won the 2009 Postbank Finance Award. The team and its supervisor, Professor Marliese Uhrig-Homburg, convinced the jury with a proposal for a better risk assessment of credits. The prize money of EUR 30,000 will inure to the benefit of both the chair and the team.

It was the task of the competition of formulate “Lessons from the Financial Crisis”. The financial crisis originated from the collapse of the American real estate market: Credits in the amount of billions dropped out. Most of them were subprime credits, that is credits granted to debtors of low credit rating. For this reason, the economic mathematicians and engineers from Karlsruhe conceived proposals for improving the determination of risks in the credit approval process, making them more transparent, and minimizing them. “We analyzed how problems of the chain of values added influence each other: From the granting of credits to the transfer of credits on the capital market”, says the spokesman of the Karlsruhe team, Daniel Müller. “In this way, incorrect assessments of credit risks can be explained.” “The jury granted the first prize, because the team’s proposal gets down to the core of the problem”, underlined the chairman of the jury, Günter Franke, Professor of International Financial Management and Head of the Center for Finance and Econometry of the University of Constance, in his laudation.

A first prize was also given to the team from the Technical University of Darmstadt, students from the Zeppelin University in Friedrichshafen ranked third. The prize winners were selected by a jury of representatives from industry, science, and media. A total of 38 teams from 26 universities in Germany and Austria submitted contributions to this competition in the past eight months. With the award, the Postbank wishes to encourage students of all disciplines to deal with current issues of financial management. The Postbank Finance Award in the total amount of EUR 70,000 is the highest German university award.

The Karlsruhe Institute of Technology (KIT) is the merger of the Forschungszentrum Karlsruhe, member of the Helmholtz Association, and the Universität Karlsruhe. This merger will give rise to an institution of internationally excellent research and teaching in natural and engineering sciences. In total, the KIT has 8000 employees and an annual budget of 700 million Euros. The KIT focuses on the knowledge triangle of research – teaching – innovation.
The Karlsruhe institution is a leading European energy research center and plays a visible role in nanosciences worldwide. KIT sets new standards in teaching and promotion of young scientists and attracts top scientists from all over the world. Moreover, KIT is a leading innovation partner of industry.
le, June 30, 2009
Contact: