For Outstanding Achievements in Elementary Particle and Astroparticle Physics 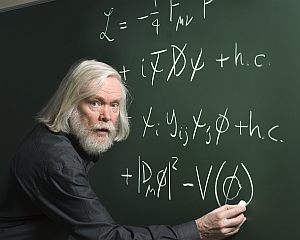 The KIT Center Elementary Particle and Astroparticle Physics (KCETA) of Karlsruhe Institute of Technology (KIT) will cele-brate the Julius Wess Award ceremony on December 10, 2009. This year’s laureate is the British physicist Professor Dr. Jona-than Ellis, who is working at CERN in Geneva. Representatives of the media are cordially invited to attend the award ceremony on December 10, 2009, 17.15 hrs, at the Lehmann-Hörsaal (building 30.22) on KIT Campus South.

After research periods at SLAC (Stanford, USA) and Caltech (Pasa-dena, USA), Professor Dr. Jonathan Ellis moved to the European Research Center CERN in Geneva in 1973, where he headed the Theory Department for six years. In the 1970s, his work focused on quantum chromodynamics, the quantum field theory description of strong (nuclear) interaction, on the so-called CP violation, a funda-mental violation of symmetry in elementary particle physics, and on the Higgs boson, a particle that is searched for in the LHC (Large Hadron Collider) accelerator of CERN and provides all elementary particles with their mass (according to standard theory). Since the 1980s, Ellis’ fields of work have also covered the unification of all forces (interactions) in the universe, including gravitation, neutrino physics, supersymmetry, cosmological applications, and quantum gravitation. His work concentrated on proposals for the experimental verification of predictions of supersymmetric theories (the first of these theories was developed at Karlsruhe by Julius Wess together with the Italian physicist Bruno Zumino). This documents the enor-mous scope and depth of Ellis’ scientific work. Ellis worked on stud-ies for physics at the LHC and is involved in feasibility studies of an LHC successor (CLIC). He is also responsible for the relations of CERN to non-member states.

The Julius Wess Award is dedicated to the memory of Professor Dr. Julius Wess, who worked tirelessly for theoretical and experimental elementary particle physics and published numerous internationally renowned papers during the 20 years he spent at the Karlsruhe Institute of Technology. Field theory concepts, such as the Wess-Zumino anomaly or the formulation of the first supersymmetric quan-tum field theory, the Wess-Zumino model, will always be associated with his name.

The research award is granted to elementary particle or astroparticle physicists for outstanding experimental or theoretical scientific achievements, which extend and deepen our understanding of the fundamental laws of nature. At the opening event of KCETA in No-vember 2008, the award was granted for the first time to Nobel Prize laureate Professor Dr. Frank Wilczek, who acknowledged the sig-nificance of Julius Wess for the theory of elementary particles at a large international conference on supersymmetry in Karlsruhe in summer 2007 already.

The KIT Center Elementary Particle and Astroparticle Physics (KCETA) coordinates the research and teaching activities of about 340 scientists, engineers, and technicians and develops strategies for the future. The Center focuses on nine scientific topics of ex-perimental and theoretical nature, the ultimate aim being to under-stand the origin, evolution, and state of the universe and the proc-esses taking place in it.


The Karlsruhe Institute of Technology (KIT) is a university of the state of Baden-Württemberg and a national research center of the Helmholtz Association. KIT focuses on a knowledge tri-angle that links the tasks of research, teaching, and innovation.