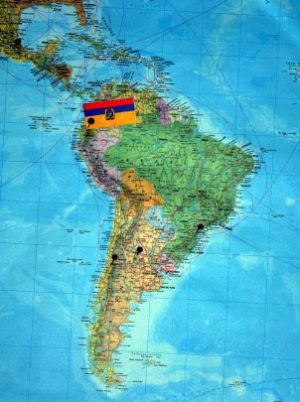 Since late summer, the KIT network of 17,000 alumni founded in 1996 has been especially committed to alumni in South America: When Club Ecuador will be accredited officially on October 27, the alumni year of 2009 in South America will have produced three new alumni associations and two expert seminars on the continent.

The KIT Alumni Network will then have 17 international “embassies” in total. Whether in Asia, Europe or America, all over the world, former students, staff members or guest scientists, who spent some time of their life in Karlsruhe, are joining alumni clubs. Apart from the club founded in Chile in 2008, alumni associations in Argentina and Brazil were established in South America in August this year.

The Ecuadorian club will now be the fourth South American alumni association. Its official foundation in the second highest capital of the world will be celebrated in the evening of October 27 in the presence of KIT president Horst Hippler and Christian Berger, the German ambassador in Ecuador. Prior to this event, discussions between graduates and students of the Escuela Politécnica Nacional (EPN) with KIT president Horst Hippler and the head of the DAAD in Quito, Paul Voerkel, will take place. In addition, a cooperation agreement between EPN and KIT will be signed.

The club in Ecuador that will start with 32 members and managed by the civil engineer and alumnus Professor Marco Castro has already defined its objectives: Apart from integrating the alumni living in Ecuador, presence at information events on studies and the labor market, establishing contacts to Ecuadorian enterprises, and internships for KIT students are on the agenda. Not only students, also pupils of the country shall be encouraged to start studies at KIT. Consequently, the German School will be visited on the day of the foundation of the alumni association.

This year’s commitment of the KIT Alumni Network to South America started with the foundation of the Argentine club in the presence of KIT president Horst Hippler on August 3 at Córdoba. 50 alumni from all parts of the country had come, also the alumnus and ambassador of the Federal Republic of Germany, Günther Knieß. At the Universidad Tecnólogica Nacional, the club president and alumna Carla Allende and DAAD lecturer Andreas Hendricks organized a multi-disciplinary alumni workshop on topics like “Applied robotics in medicine” or “Corrosion and stability of steel concrete structures”.

To found the alumni club in the country of samba, 25 alumni met Professor Horst Hippler at the Universidade Federal do Paraná (UFPR) in Curitiba, Brazil, on August 5. This club also appointed a female president: Professor Claudia Krüger, coordinator for young scientists and post-graduates at the UFPR.

Advanced training of the alumni was in the focus of the energy expert seminar in Chile on September 24 and 25, as was the exchange of information on the solution of urgent social, scientific, and economic problems. At Santiago de Chile, the seminar “Sustainable energy supply in Europe and South America” covered the different requirements of both continents with respect to climate protection, security of supply, and economic efficiency. The event with about 30 alumni and 6 scientists from KIT was opened by the Chilean Alumni Club president Jaime Zuazagoitia and Professor Horst Hippler. It was organized by Wolf Fichtner, Head of the KIT Institute for Industry Management and Industrial Production. The KIT Alumni Network wishes to actively support life-long learning of alumni. Hence, energy will remain in the focus in 2010, as “the alumni in Latin America are especially interested in solutions of energy problems”, explains network coordinator Claudia Reichert, “we are pleased that they are interested in the know-how of KIT scientists and contribute to this exciting exchange of information”.