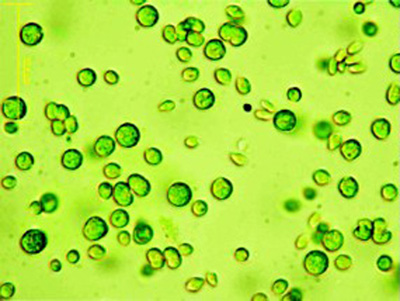 In view of the shortage of petrochemical resources and climate change, development of CO2-neutral sustainable fuels is one of the most urgent challenges of our times. Energy plants like rape or oil palm are being discussed fervently, as they may also be used for food production. Hence, cultivation of microalgae may contribute decisively to tomorrow’s energy supply. For energy production from microalgae, KIT scientists are developing closed photo-bioreactors and novel cell disruption methods.

Microalgae are monocellular, plant-like organisms engaged in photosynthesis and converting carbon dioxide (CO2) into biomass. From this biomass, both potential resources and active substances as well as fuels like biodiesel may be produced. While growing, algae take up the amount of CO2 that is later released again when they are used for energy production. Hence, energy from algae can be produced in a CO2-neutral manner contrary to conventional energy carriers.

However, this is not their only advantage: “Compared to land plants, algae produce five times as much biomass per hectare and contain 30 to 40% oil usable for energy production”, says Professor Cle-mens Posten, who directs this research activity at the KIT Institute of Life Science Engineering. As the algae may also be cultivated in arid i.e. dry, areas not suited for agriculture, there is hardly any competition with agricultural areas. There, however, closed systems are required.

Newly developed plate reactor for an optimum light
management in the cultivation of microalgae.
(Photo by: Florian Lehr)

Presently, algae are being produced in open ponds in southern countries of relatively small productivity. This is where Posten’s new technology starts. “In terms of process technology, our approach is completely different, as we are working with closed photobioreactors”, underlines the scientist. “Our plants convert solar energy into biomass, the efficiency being five times higher than that in open ponds.” The plates in usual photo-bioreactors are arranged verti-cally. “Every alga sees a little bit less light, but the plant is operated at increased efficiency”, emphasizes the biologist and electrical engineer. Modern designs under investigation will find more intelligent ways to light distribution.

Consequently, algae production does not only work in countries with an extremely high solar irradiation. Most algae need a maximum of ten percent of the incident sunlight intensity. According to Posten, the remaining fraction would just be wasted, if light management in the photobioreactor would not be optimum. Posten points out that the Sahara offers just twice as much sun as Central Europe. But there, the reactor contents would have to be cooled. Other advantages of the closed system are drastic savings of water and fertilizers. Double use of algae for the production of food or fine chemicals and subsequent energy production from the residualbiomass may also be conceivable.

Posten’s institute hosts one of the two KIT working groups focusing on research in the field of algae biotechnology. “As far as the development of photobioreactors is concerned, we are among the three locations worldwide, where considerable progress is being achieved in both process technology and biology”, explains Posten.

The stop of his research area on the southern KIT campus marks the starting point of research conducted by the Institute for Pulsed Power and Microwave Technology on the northern campus of the KIT. Here, it is focused on extracting the valuable constituents of the algae biomass by an electric pulsed treatment. So far, Dr. Georg Müller, head of this institute’s Pulsed Power Technology Division, has studied the decomposition of plant cells of olives, grapes, apples, sugar beets, and terrestrial energy plants in cooperation with partners from research and industry. Partly, large-scale facilities were constructed. “It is our objective to develop new economically efficient and sustainable extraction methods to obtain a maximum amount of cell constituents from the algae that can be used for energy production”, says Müller. ”The plant cells are exposed to a high electric field for a very short term. This causes a perforation of the cell membrane and the constituents are released.”

Cooperation of both working groups now aims at bundling the existing know-how, with starting funds being provided by the KIT Energy Center. It is planned to establish a KIT “Algae Platform” for energy production from microalgae. In the medium term, pilot-scale and demonstration plants shall be built on the northern KIT campus, with the favorable conditions in terms of space and infrastructure being made use of. “This will represent a major node in the presently rather rapid networking of algae biotechnology”, emphasizes Posten. To make energy production from algae economically efficient, it will be focused on minimizing investment and operation costs of photobioreactors and on developing highly efficient processes for the harvesting and decomposition of algae.

To close the cycle for the complete use of algae biomass for energy production, KIT researchers even go another step forwards. The biomass remaining after extraction (60 – 70%) is planned to be con-verted into other energy carriers like hydrogen or methane by means of the hydrothermal gasification process developed on the northern campus.

The Karlsruhe Institute of Technology (KIT) is one of Europe’s leading energy research establishments: The KIT Energy Center pools fundamental research with applied research into all relevant energy sources for industry, households, services, and mobility. Holistic assessment of the energy cycle also covers conversion processes and energy efficiency. The KIT Energy Center links competences in engineering and science with know-how in economics, the humanities, and social science as well as law. The activities of the KIT Energy Center are organ-ized in seven topics: Energy conversion, renewable energies, energy storage and distribution, efficient energy use, fusion technology, nuclear power and safety, and energy systems analysis.

The Karlsruhe Institute of Technology is the merger of the Forschungszentrum Karlsruhe, member of the Helmholtz Association, and the Universität Karlsruhe. This merger will give rise to an institution of internationally excellent research and teaching in natural and engineering sciences. In total, the KIT has 8000 employees and an annual budget of 700 million Euros. The KIT focuses on the knowledge triangle of research – teaching – innovation. It sets new standards in the promotion of young scientists and attracts top scientists from all over the world. Moreover, KIT is a leading innovation partner of industry.