Achievements of Modern IT Management 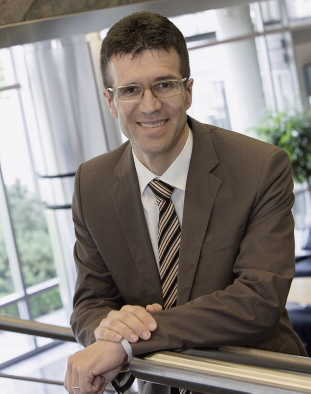 What are the challenges for a trend-setting IT management at enterprises and which requirements have to be fulfilled? Answers will be given by Dr. Michael Gorriz, Chief Information Officer (CIO) of Daimler AG. His public presentation “Does IT Mat-ter? Challenges for a Modern CIO“ will be organized in cooperation with the KIT Career Service and take place on May 13, 2009, 18.00 hrs at the Audimax of KIT (Straße am Forum 1). Journalists are cordially invited.

IT is everywhere! Penetration of Daimler AG with information technology will be in the focus as will be the question of whether difficult economic boundary conditions may accelerate processes of change according to the motto of: ”Successful from out of the Crisis?!” Gorriz will also pay attention to sustainable creation of values added by IT and talk about the significance of qualified staff as a basis of success.

Since January 01, 2008, Gorriz has been working as Chief Information Officer (CIO) of Daimler AG and heading the Section of Information Technology Management (ITM). There, he is responsible for the strategy, planning, and development of all IT systems as well as for the operation of all computing centers and communication networks of Daimler AG. He started his professional career at the German aerospace company Messerschmitt-Bölkow-Blohm GmbH, the later Daimler-Benz subsidiary DASA, today part of the European Aeronautic Defence and Space Company (EADS). From 1994, the physicist managed Daimler-Benz Aerospace in Mexico and after-wards he worked as a section head at Nortel DASA. In early 2000, he started work as a Vice President IT Business Systems at Daimler IT Management and in 2005, he additionally became CIO of Mercedes-Benz Cars and Vans. In this function, he was in charge of all IT systems in the sections of Mercedes-Benz Cars and Vans of the Daimler AG worldwide.

After the presentation, the audience will be invited to have some snacks and, thus, be given the opportunity to start more detailed talks.

Daimler AG is sponsor and cooperation partner of the CareerServices of the KIT. Since 2008, the partners have been initiating joint projects to support the career of young graduates.

The Karlsruhe Institute of Technology (KIT) is the merger of the Forschungszentrum Karlsruhe, member of the Helmholtz Asso-ciation, and the Universität Karlsruhe. This merger will give rise to an institution of internationally excellent research and teach-ing in natural and engineering sciences. In total, the KIT has 8000 employees and an annual budget of 700 million Euros. The KIT focuses on the knowledge triangle of research – teaching – innovation.

The Karlsruhe institution is a leading European energy research center and plays a visible role in nanosciences worldwide. KIT sets new standards in teaching and promotion of young scien-tists and attracts top scientists from all over the world. More-over, KIT is a leading innovation partner of industry.