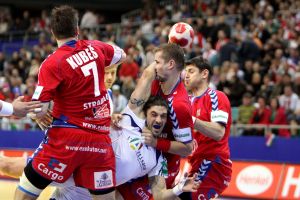 Sports, such as handball, are good models to study competition. Insights can also be used outside of sports. (Photo: Steindy/Wikimedia Commons)

Sports fans know this. One is watching a match, but it is not really exciting. The favorite is known and this is also reflected by the behavior of the teams. The match is lacking excitement and intensity. A team of researchers with one member coming from Karlsruhe Institute of Technology (KIT) studied this phenomenon and found that the heterogeneity of contestants negatively affects the intensity of competitions. This is also of interest to business management in order to enhance the efficiency of competitions.

“Organizers of sports events are highly interested in exciting and intensive competitions,” Professor Petra Nieken, Holder of the Chair for Human Resources Management at KIT, says. “If homogeneous, i.e. equally strong, contestants compete, this directly affects the intensity of the match. It is easy to imagine that more intensive matches have higher numbers of spectators as well as increased sales of tickets and merchandise articles.” However, this phenomenon is not only relevant to sports events. Many companies organize their employees in teams that compete for e.g. common resources. Yet in this case, the work effort cannot be observed easily. Hence, the work of the scientists has two objectives. First, the research results can help to organize exciting and profitable sports events. Secondly, sports also serves as a model for other competitions and allows to draw conclusions with respect to business management and the design of efficient competitive situations at companies.

Together with Dr. Johannes Berger of Cologne University, Nieken analyzed all 612 matches of the TOYOTA Handball National League in the seasons 2006 to 2007 and 2007 to 2008. Apart from the goals scored, venues, numbers of spectators, and referees, the researchers also evaluated the two-minute time penalties and betting odds. These are used as key variables for defining the degree of intensity and heterogeneity.

Despite Handball being a rather physical type of sports, in which body contact is not necessarily punished, players are given a two-minute time penalty for a hard foul. “These time penalties are a good measure of the intensity of the match,” Nieken explains. “Teams that do not want to concede goals may play physically in the defensive, which will be punished whenever tolerance limits are exceeded.”

To determine the degree of heterogeneity, i.e. the difference in the strengths or chances of both teams before the match, the researchers use betting odds. “The betting odds reflect not only the sports skills of a team, but also take into account other events in a season, such as injuries of key players or transfers,” Nieken says.

“Understanding of the behavior of favorites and underdogs in sports can be partly transferred to competitions between and within firms. Findings from sports may be helpful to make competitions fairer and more homogeneous. In the end, a fair competition, i.e. in case of pending promotions, leads to higher efforts and increased staff motivation,” Nieken summarizes.