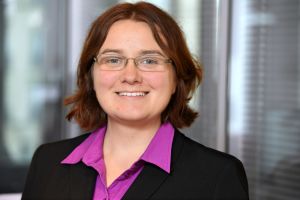 For her doctoral thesis, “Entwicklung eines mikrofluidischen Brailledisplays” (development of a microfluidic Braille display), Dr. Elisabeth Wilhelm is honored with the one of the German Thesis Awards 2016 (Photo: Körber Foundation/David Ausserhofer)

Many applications on digital devices use graphical elements such as widgets, icons, windows, menus, often improving their ease of use. For visually impaired people, however, they have exactly the adverse effect, as so-called Braille displays so far only convert alphanumerics into Braille. At Karlsruhe Institute of Technology (KIT), Elisabeth Wilhelm designed a display on which not only alphanumerics, but also images and graphics become tactile. For her doctoral thesis, she is now honored with the German Thesis Award 2016 in Natural and Technical Sciences, worth EUR 25,000. The award ceremony will take place on 8th November in Berlin in the presence of Norbert Lammert, President of the Bundestag and patron of this award.

“The promotion of junior scientists plays an important role at KIT,” Professor Holger Hanselka, President of KIT, states. “It focuses on the PhD degree as the first step in their career. It is an overwhelming success that one of the highly sought-after German Thesis Awards goes to a female mechanical engineer – congratulations to Elisabeth Wilhelm!”

At the Institute of Microstructure Technology, Elisabeth Wilhelm designed a large-scale, cost-effective Braille terminal that displays graphics as tactile elements. Her aim is to enable people with sight impairments to access important graphics contents and control elements, allowing for the fact that digital information increasingly consists of images and graphics. Traditional terminals for visually impaired people are not able to display these in Braille. The display developed by Elisabeth Wilhelm is based on a microfluidic chip with phase change valves that can be addressed individually. If some valves are open, a specifically designed pump then pumps fluid to the corresponding locations that bend up slightly. This way, an imprint of the digital information is created that reproduces not only alphanumerics, but also shapes as tactile image elements. Elisabeth Wilhelm built an exemplary prototype that is equipped with this technology.

The annual German Thesis Award, established by the Körber Foundation, honors the achievements of the best German junior scientists in Humanities, in Social Sciences, and in Natural Sciences and Sciences of Technology. Coming with a total of more than EUR 100,000, it counts among the most valuable awards for junior scientists in Germany.