Movable Microstructures from the Printer 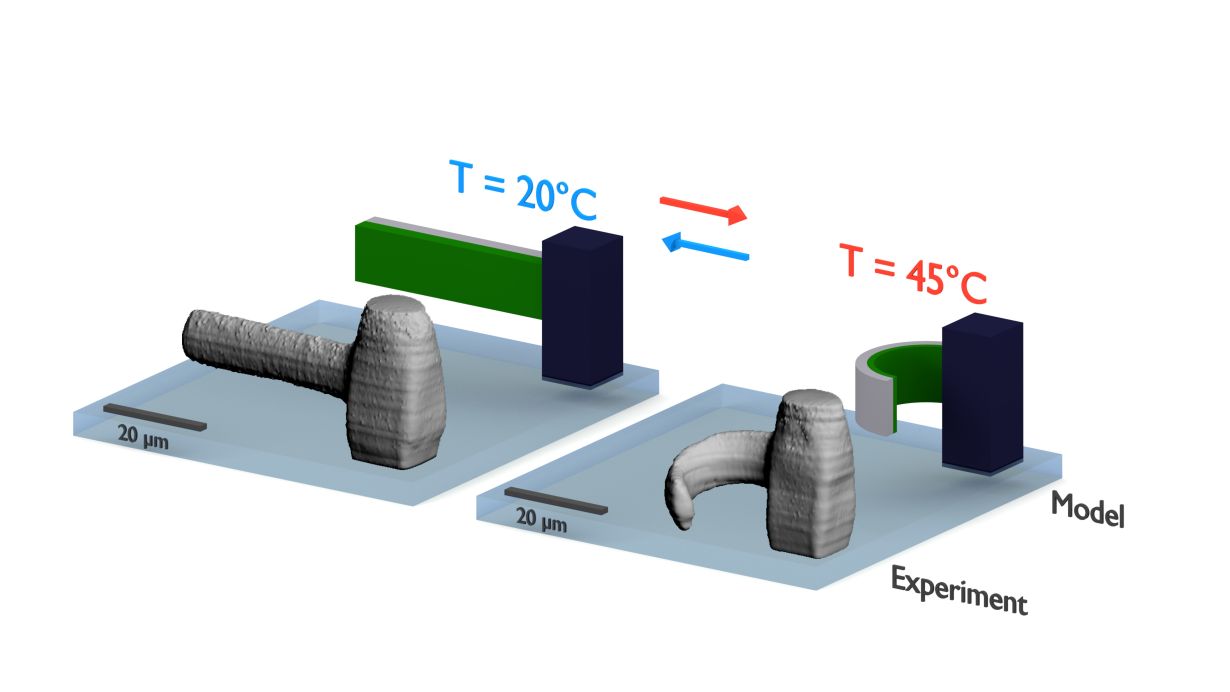 The right material does the trick: The objects from the 3D printer are still movable even after printing and can be stimulated, for example, by a change in temperature. (Graphic: Marc Hippler, KIT)

Laser-based 3D printing can already be used today to produce any structure on a micrometer scale. However, for many applications, especially in biomedicine, it would be advantageous if the printed objects were not rigid but switchable. Researchers at the Karlsruhe Institute of Technology (KIT) have now been able to print microstructures that change shape under the influence of temperature or light. The results were published in the journal Nature Communications. (DOI: 10.1038/s41467-018-08175-w)

3D printing has established itself as a technology with countless fields of application. Direct laser writing is considered a particularly promising method: A computer-controlled focused laser beam acts as a pen and creates the desired structure in the printer ink, which here is a photoresist. In this way, any three-dimensional form down to a size of a few micrometers can be created. "However, for many applications, particularly in biology and biomedicine, it would be desirable not only to produce rigid structures but also active systems that are still movable after the printing process, e.g., that can change their shapes by an external signal," emphasizes Professor Martin Bastmeyer from KIT’s Zoological Institute and Institute of Functional Interfaces. In cooperation with Professor Martin Wegener's group at Institute of Applied Physics and Institute of Nanotechnology at KIT as well as chemists from Karlsruhe and Heidelberg, a printing process for such movable structures has now been developed. Special materials, i.e.,  stimulus-responsive polymers whose properties can be modified by external signals, are used for the printer ink. The chemical compound poly(N-isopropysycraymide) changes its shape considerably when the temperature is raised only slightly above room temperature. The 3D structures produced in this way are functional in aqueous environments and thus ideal for applications in biology and biomedicine.

"We have developed the method to such an extent that we can also manufacture complex structures in which, as a result of external stimulation, the moving parts do not all react in the same way, but show different but precisely defined reactions," explains Marc Hippler, first author of the study. This is made possible by grayscale lithography, where the photoresist is not exposed with the same intensity at all points, but is exposed in a graded manner. This allows the desired material properties, and thus the strength of the movement at a certain temperature change, to be set very precisely. With computer simulations, the resulting movements can be precisely predicted and therefore allow a rational design of complex 3D structures.

The working groups around Martin Bastmeyer and Martin Wegener have gone one step further: Instead of temperature, focused light is used as a control signal. For the first time, this allows the targeted control of individual microstructures in a complex, three-dimensional arrangement. This feature could be used, for example, in microfluidic systems. Since the photoresist used can be switched at room temperature, there are additional applications in basic biological research, e.g., the targeted mechanical manipulation of individual cells.

The interdisciplinary study was carried out as part of the "3D Matter Made to Order" excellence cluster, a joint research association of Karlsruhe Institute of Technology and Heidelberg University. PhD students from the Karlsruhe School of Optics & Photonics (KSOP) of KIT were involved also.