Research into Winter Storms above Karlsruhe 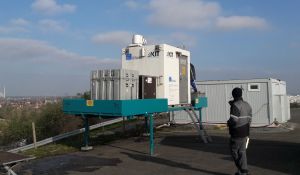 At Christmas 1999, the storm “Lothar” passed Europe with more than 250 km per hour. The highest wind speed in the planes in Germany was measured in Karlsruhe with 151 km per hour. In Germany, Lothar caused damage in the amount of more than EUR 1 billion. Although it is considered a “storm of the century,” other wind storms have followed in the meantime. Researchers of Karlsruhe Institute of Technology (KIT) wish to improve the forecast of winter storms. In the 2016/2017 winter, they observe the development of wind gusts with measurement instruments on the Karlsruhe energieberg (energy hill).

The measurement campaign is part of the collaborative center “Waves to Weather,” in which scientists from all over South Germany work on making weather forecasts more precise and reliable. The focus lies on the relation between large-area waves in airflow and local weather in order to produce the physically best possible weather prognosis. Work of the Institute of Meteorology and Climate Research of KIT (IMK) concentrates on maximum wind gusts, i.e. highest wind speeds occurring during a storm. These maximum wind speeds often cause most of the damage within a few seconds.

“Winter storms are among the most devastating natural catastrophes in Europe. Frequently, they cause casualties and insured losses running into billions. In the past decades, forecasts of storm tracks and strengths improved considerably, but it still remains a big challenge to reliably and precisely predict when which area will be affected to what an extent. This information is enormously important for warning the population and for assessing the damage,” storm researcher Dr. Florian Pantillon of IMK, says. For this reason, the scientists of KIT want to better understand the development and movement of gusts based on a precise and systematic observation. The findings will then be incorporated in new forecast systems.

Within the framework of the WASTEX (acronym of wind and storms experiments) measurement campaign, the KIT researchers measure vertical and horizontal air movements with a range of up to eight kilometers. For this purpose, the KIT team headed by Professor Peter Knippertz and Dr. Ulrich Corsmeier set up the Doppler LIDAR (light detection and ranging) on the energy hill in Knielingen, a district of Karlsruhe. A LIDAR emits laser pulses. Based on the back scattered signal, information on the wind can be derived thanks to the Doppler effect that is based on the frequency shift of scattered light on moved objects. “We can measure wind speeds with a spatial accuracy of up to 70 meters and temporal accuracy of 0.1 seconds,” scientist Dr. Bianca Adler, IMK, explains. In case of an approaching storm, the instrument can be switched on remotely.

In the long term, the collaborative research center/transregio project “Waves to Weather” wants to reduce the uncertainty factor of the prognosis by more precise data and the combination of various observation and modelling methods. For this purpose, scientists of KIT, of Ludwig-Maximilians-Universität München as coordinator, Johannes Gutenberg University Mainz, Heidelberg University, Technical University of Munich, and the German Aerospace Center cooperate across regions.