Elke Luise Barnstedt Is About to Retire

Good Work at KIT and Joint Statutes Carry Her Signature – President Hanselka: “An Excellent and Most Energetic Vice President” 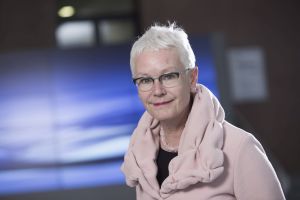 She developed the Ethical Principles of Karlsruhe Institute of Technology (KIT), defined the basis for a standardized staff concept as Vice President for Human Resources and Law, and managed the smooth transition of about 9000 employees from the state of Baden-Württemberg to KIT as employer. The joint statutes of KIT adopted in late 2013 also carry the signature of Barnstedt. And with the self-commitment “Gute Arbeit am KIT” (Good Work at KIT), Barnstedt preceded legal regulations and advocated reliable planning of career paths. The list of her projects and successes is long. Now, Dr. Elke Luise Barnstedt is about to retire on December 31.

“With high pleasure and deep gratitude, I look back on the six years at KIT,” Elke Luise Barnstedt says. “It was an exciting time, and I am very glad that I had the opportunity to actively shape the growing together of KIT. At a number of committee meetings, I watched how the KIT staff participated enthusiastically in unifying KIT. About two years ago, I was very impressed when a working group of the KIT Senate unanimously proposed abolition of separate budget flows and separate voting processes in the KIT Senate. Unfortunately, this was not pursued any further by politics,” Barnstedt says.

“Elke Luise Barnstedt was an excellent and highly energetic Vice President,” says the President of KIT, Professor Holger Hanselka. “Without her tireless work, KIT would not stand on such a good, solid foundation today. In trusting cooperation, we succeeded in adopting the joint statutes, a milestone in the history of KIT. Thanks to her work, we now have a unified staff concept. In her term of office, transition of the KIT employees from the state of Baden-Württemberg to KIT as employer was managed successfully,” Hanselka continues.” Elke Luise Barnstedt undoubtedly left her traces in the areas of equal opportunities, compliance regulations, good practices, regulations for appointments or institute regulations at KIT. I would like to thank her very much for her high commitment.”

On behalf of the Staff Council, Chairman Dr. Wolfgang Eppler thanks the Vice President for Human Resources and Law for her constructive cooperation: “With Mrs. Barnstedt, a negotiation culture characterized by mutual respect and by taking the interests and arguments of the other side seriously was established at KIT,” Eppler emphasizes. “Major efforts focused on staff planning and the limitation of fixed-term employment contracts within the self-commitment “Good Work” required by the state government.”

In 2011, Elke Luise Barnstedt moved from her post as Director with the Federal Constitutional Court to KIT. With this, she returned to the place of work where she had started her professional career. She already had been employed by Universität Karlsruhe from 1988 to 1994, with her last post being that of the Deputy Chancellor. During her term of office as Vice President, she advocated reliable planning of career paths for the employees of KIT. In the self-commitment “Gute Arbeit am Karlsruher Institut für Technology” (Good Work at Karlsruhe Institute of Technology), the Presidential Committee of KIT, the KIT Senate, and the Staff Council adopted regulations relating to the limitation of the overall duration of fixed-term employments. During her term of office, the number of fixed-term employments over long times were reduced in favor of permanent employment relationships. She established a compliance system based on codes of conduct developed with the participation of many employees.

Barnstedt’s successor as Vice President for Human Resources and Law will be Christine von Vangerow (see Press Release of KIT 141/2016) as of January 01, 2017.