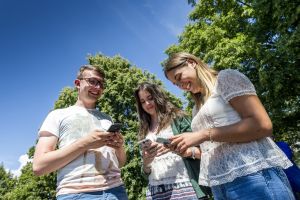 Subjective perception of the danger caused by the radiation of the mobile phone can be increased by more information and preventive communication. (Photo: KIT)

In democratic societies, it is considered an obligation of researchers and politicians to inform the public about modern technologies and their potential risks. Researchers of KIT and the University of Wollongong, Australia, recently found that information about technologies and their risks may have undesired side effects. It may also cause worries where they do not seem appropriate, as is reported in the international Journal of Environmental Research and Public Health. DOI: 10.3390/ijerph13100992

“Today, technical innovations dominate our everyday life in many areas. New technologies, however, always are associated with risks – and these are also seen by laymen,” says Christoph Böhmert, first author of the recently published study and researcher of the Science Communication Group of KIT’s Institute for German Studies. “It is crucial to enable adequate communication between science and society, which does not only consider scientific findings, but also concerns of the population.” The study clearly showed that communication of risks may be complicated sometimes. Information on efficient precautions was found to lead to an increased risk perception by the recipients of the information.

In their study, the researchers analyzed communication about a technology that has become indispensable in our life – mobile communications and the electromagnetic fields on which it is based. All over the world, radiation protection authorities, such as the German Federal Office for Radiation Protection, communicate the current state of research into risks of electromagnetic fields as follows: Investigations made and all findings obtained so far do not allow any conclusions to be drawn with respect to mobile communications being a risk for human health. But, the experts continue, there still are knowledge gaps as regards long-term impacts. Then, measures are recommended to reduce exposure of the individual to electromagnetic fields. The Federal Office for Radiation Protection, for instance, recommends to keep telephone conversation short, to buy a mobile phone with a low radiation value, or to use a headset to prevent the mobile phone from being in direct contact with the head.

It had been known from previous studies already that information on precautions may increase worries. It had been suspected that people conclude from the recommendation of precautions that there really is a risk. This effect was not confirmed by the recent study. The scientists rather attributed the increased worries to a lack of knowledge about the propagation of electromagnetic fields.

Within the framework of the study, the recommended precautions were submitted to 1717 Australians, together with one of six information brochures providing scientific background information. When test persons were given not only the recommendations, but also explained why observation of these tips strongly reduces their exposure to electromagnetic fields, worries increased. For example, scientists explained to the test persons that telephone conversations with a headset largely reduce exposure. When a mobile phone is located ten centimeters instead of just one centimeter away from the ear, the electric power absorbed by the ear is about one hundredth of the initial value. Hence, the own mobile phone usually causes an exposure that by far exceeds that of mobile communications stations that are generally referred to as “cellphone towers.” While the scientists wanted to explain the effectiveness of precautions, test persons mainly considered this information to be an indication of their mobile phone – not the transmission towers – being dangerous. As a result, they perceived increased risk potentials for telephone conversations with their mobile phones.

“The study reveals that messages on precautions and information are a double-edged sword in terms of subjective risk perception. Their use should be far better understood,” Böhmert says.