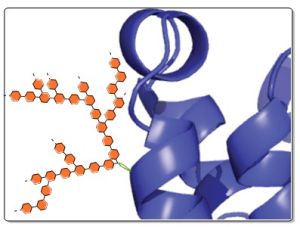 Proteins are among the most important constituents of any living organism and responsible for a multitude of tasks in biosystems: Similar to levers and gear wheels in machines, proteins control, initiate, and support biological activities and functions in the cell. In medicine, proteins are needed as antibodies in vaccine development. One of the biggest challenges today is to develop new vaccines against cancer diseases. Together with international partners, scientists of Karlsruhe Institute of Technology (KIT) have now established a method to produce genetically modified proteins on a large scale. Rapid production of designer proteins might open up new applications in bioengineering and the pharmaceutical sector. Researchers present their approach in “Nature Methods.“
(DOI: 10.1038/nmeth.4032)

“Proteins are important building blocks for all living organisms,” Stefan Bräse, Professor of the Institute of Organic Chemistry and Director of the Institute of Toxicology and Genetics of KIT, says. “Cells, muscles, organs contain proteins. Complex protein systems decode or encode genetic information of the DNA to generate other proteins with a variety of tasks. “Bioengineered proteins are frequently used in research and medicine. Compared to the original form, properties of these proteins have been modified and adapted to the new system: These recombinant proteins are modified with the help of specific genetically modified DNA viruses. The new structure carries the target function envisaged. For a long time, the intestinal bacterium Escherichia coli (E.coli) has been applied as expression medium, or machine, to produce novel proteins. “E.coli is a very simple organism,” Bräse explains. As regards the biosynthesis of designer proteins, however, E.coli has several disadvantages.

For this reason, insect cells, so-called Sf21 cells, were increasingly applied as expression system, together with the “MultiBac system.” This system uses a transfer vector, a type of “gene shuttle” which contains the information required for setting up the recombinant modified protein. “By combining the MultiBac system with site-specific genetic engineering methods, i.e. MultiBacTAG, we can produce nearly any protein with integrated target functionalities in large amounts and at high quality,” says Dr. Edward Lemke, Head of the High-Resolution Studies Group of the European Molecular Biology Laboratory (EMBL) in Heidelberg. “For this, the system needs only a few weeks. We used it directly for our glycan structures,” Bräse adds.

With the help of this innovative method, the international partners succeeded in introducing site-specific, unnatural amino acids into the target protein. A newly designed, orthogonal enzyme, the tRNA/tRNA synthetase pair, recognizes these unnatural amino acids and can incorporate them easily in the desired target structure.

By combining the MultiBac system with the orthogonal tRNA / tRNA synthetase pair, Lemke and Bräse and their groups succeeded in producing protein complexes with nuclei in insect cells. They carry unnatural amino acids, and, hence, allow for a variety of applications. The technology to expand the genetic code is indispensable for today’s medicine and bioengineering. “MultiBacTAG is user-friendly and easily reproducible. As the components of the modified genetic code are inserted into the structure of MultiBacTAG, users can use our expansion without special experience or knowledge,” Bräse says.

In tests with insects and mammalian cells, the chemical biologists demonstrated application for a variety of proteins and protein complexes. For instance, they produced Herceptin, a protein used as antibody for breast cancer diseases. “We assume that MultiBacTAG will allow for a number of customized protein design options in bioengineering and pharmaceutical applications,” Bräse summarizes. “It might be very useful in particular for research into protein complexes and their functional interactions.”

The paper entitled “Genetic code expansion for multiprotein complex engineering” can be found at:
www.nature.com/nmeth/journal/vaop/ncurrent/full/nmeth.4032.html