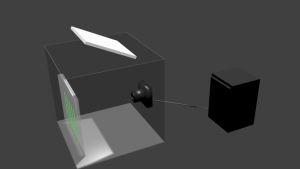 In the past 70 years, the world’s population tripled to more than seven billion and average global temperature increased by nearly one degree Celsius. Population growth and climate change are associated with big challenges facing modern agriculture. Karlsruhe Institute of Technology (KIT) combines computer science and biology to identify genes that make plants more resistant to stress factors, such as drought and saline soils.

“To cope with changed requirements on agriculture, development of new plant species is indispensable. For this, we need a better understanding of important crops, such as rice that is considered the most important source of food worldwide,” Dr. Michael Riemann of the Molecular Cell Biology Division of KIT’s Botanical Institute explains. Together with the startup da-cons, he developed the RiSeGrAn (Rice Seedlings Growth Analysis) system that analyzes the growth of rice seedlings. By comparing genetically different species, conclusions can be drawn with respect to the function of certain genes for resistance against a variety of stress factors. As research concentrates on the first phases of seedling development, gene variations can be classified more quickly. The system uses an infrared camera to take photos of plant seedlings growing in darkness. “At first, the seedlings have to grow in the dark for them to become highly sensitive to light. Then, we can measure the effect of the light on the seedlings,” Riemann explains. In the next step, the system evaluates the photos automatically.

Setup of the RiSeGrAn System

The system is accommodated in a box of 50 times 50 centimeters in dimension. The interior is illuminated by 20 infrared LEDs. “The seedlings change their appearance depending on whether they grow in the dark or in light. However, the system is to observe the plants and not to influence them. For this reason, the box is designed to prevent visible light from falling on the seedlings,” Riemann says. The seedlings are arranged in a sealed plate in water agar, a transparent nutrient medium that supplies the seedlings with water. For a detailed documentation of plant growth, the system takes a picture every hour for a period of ten days in a computer-controlled manner without a person having to look into the box. Algorithms developed by da-cons GmbH are used to determine from the photos the lengths of the shoot, the first leaf, and the root. In addition, the computer transmits the photos automatically to a server, where they can be look at by the researchers. 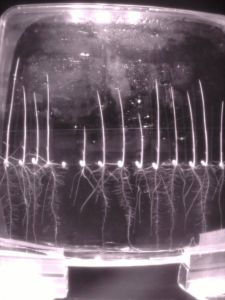 Analysis of 14 rice seedlings on a plate in water agar.
(Photo: da-cons GmbH)

“By means of the system, we can discover unknown properties of known genes. For example, we can precisely measure parameters, such as the time of germination or growth of certain tissues,” Riemann explains. “Our measurements can support molecular biology studies by identifying the genes that make plants more resistant to certain stress factors, e.g. saline soils.”

In the next step, the developers of the RiSeGrAn project plan to establish an online OpenData platform based on the data collected. Scientists can then publish their data on this platform. OpenData means that raw data obtained from experiments are to be made available to other scientists. Researchers are enabled to check initial results or to study the data for certain characteristics. “Based on the data of the RiSeGrAn system, we can now test how to transfer them to the OpenData platform in the best way. In addition, we can estimate the required computer capacity and study various ways of presenting the results,” Dr. Michael Kreim, Development Director of da-cons GmbH, says. “In general, technical background processes and the user interface can be developed better with realistic data than with test data.” da-cons uses the data sets of the RiSeGrAn project to determine requirements to be met by the platform and to test the latter.