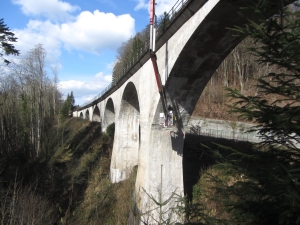 Detailed radar and ultrasonic measurements were made from a mobile platform underneath the Laufenmühle viaduct. (Photo: IONYS/KIT)

The Waldbahn railway line near Welzheim is one of the most beautiful railway lines in South Germany and listed as a monument. Its viaducts, however, require restoration. The 100-year-old Laufenmühle viaduct, for instance, exhibits major damage, such as cracks in the reinforced concrete. If the viaduct was restored with standard state-of-the-art methods, the expenditure and costs would be enormous and the monument character would be endangered. The KIT Innovation Hub “Prevention in Construction” now succeeded in bringing together the right partners and in developing a customized approach to sustainable repair of the viaduct.

“Construction of the Laufenmühle viaduct 100 years ago was a technical masterpiece of civil engineers. Now, engineers also break new ground in the restoration of the damaged concrete pillars and arches,” explains Professor Andreas Gerdes, Scientific Director of the KIT Innovation Hub. Based on today’s regulations and building data collected, a support construction of 30 to 50 cm thick concrete arches had been envisaged underneath the viaduct. However, this would have changed the appearance of the bridge. “The associated expenditure and costs would have been enormous,” Gerdes points out. “Instead, we used modern scientific methods to improve the database and to adapt the repair concept to the viaduct without damaging its basic structure.” Use of modern scientific methods for historic constructions results in customized options for the preservation of monuments, in particular for early reinforced concrete constructions.

“By ultrasonic and building radar measurements, every centimeter of the viaduct was examined down to a depth of 50 to 70 cm and documented. The damaged points were identified and assessed,” Gerdes reports. Cooperation between IONYS AG, a spinoff of KIT, and the Patitz engineering office produced a detailed picture of the damage of the viaduct. With these data, the Rothenhöfer engineering office carried out innovative computations and provided the static basis for repair. Such detailed recording and analysis of data facilitates sustainable planning for municipalities as the building owners. Resources can be used optimally and a customized repair concept can be implemented.

For the Laufenmühle viaduct, this means that cement suspensions will be injected specifically into the damaged areas of the arched bridge. “In this way, the original appearance of the Laufenmühle viaduct will be preserved,” Gerdes says. “And, in addition, restoration costs are reduced considerably.” Now, the city of Welzheim only has to afford an amount of EUR 2.2 million instead of 3.5 million for the originally planned restoration. At the same time, further operation of the railway line as a tourist attraction will be ensured. Parallel to operation, restoration is planned to be completed by summer 2017.

The historic Waldbahn railway line between Rudersberg and Welzheim consists of three viaducts, the Laufenmühle viaduct, the Strümpfelbach viaduct, and the Igelsbach viaduct. The ensemble of nearly 23 km in length is listed as a monument. In particular, the Laufenmühle viaduct is considered a major construction of early railway building and has become a landmark. Since 2010, the railway line has been operated as a tourist attraction and developed to a major infrastructure for the spa of Welzheim.

The restoration method was developed by the KIT Innovation Hub “Prevention in Construction.” The KIT Hub wants to bring together the actors of the complete innovation and value-added chain, in particular small and medium-sized enterprises. Competences are to be pooled and sustainable solutions are to be developed for the preservation of modern as well as historic technical infrastructure buildings. All these goals were met when planning the repair of the Laufenmühle viaduct: Scientists of KIT, IONYS AG - a spinoff of KIT and Karlsruhe University of Applied Sciences, and the engineering offices Rothenhöfer and Patitz in Karlsruhe jointly developed a sustainable solution that is in the interest of all parties.