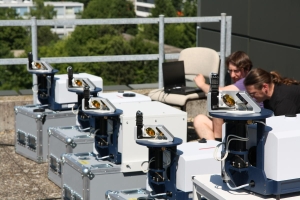 Comparative measurements with multiple Fourier spectrometers were performed on the rooftop terrace of the KIT Institute of Meteorology and Climate Research. (Photo: Dr. Frank Hase)

They already tracked down carbon dioxide and methane in Berlin, Paris, and Tokyo: Climate researchers of Karlsruhe Institute of Technology (KIT) developed a mobile measuring station that can be used to detect local sources of green house gas. In the future, their data will help devise measures that limit climate change and reduce emissions systematically. The researchers will present their method at the Week of the Environment that is organized by the Federal President’s Office and the German Federal Environmental Foundation (DBU) on June 7 and 8 at Bellevue Palace in Berlin.

Researchers at the Institute of Meteorology and Climate Research (IMK) developed the portable station, a Fourier spectrometer, in cooperation with Bruker Optik GmbH from Ettlingen. “This Fourier spectrometer allows us to measure the gas content indirectly through the sunlight instead of locally: As greenhouse gases hinder the transport of thermal radiation in the atmosphere, the station can determine the gas concentration by measuring the remaining radiation with an unrivaled accuracy,” Frank Hase from IMK explains. This way, the measurements also allow statements about the sources and sinks of green house gas (GHG).  Ecosystems that absorb more GHG than they emit are referred to as greenhouse gas sinks.

In 2014, Berlin saw the first successful application of the new method: By using five spectrometers distributed over the city, the researchers were able to measure both the increased values in the city plume and the background concentration, i.e. the quantity of greenhouse gases already accumulated in the surrounding air. The actual emission levels of carbon dioxide and methane could be calculated from the respective differences. Last year, measurements were conducted in Paris and, very recently, in Tokyo. Such data could be of considerable help when developing measures to limit climate change and reduce emissions systematically.

With their method, the researchers were also able to detect methane released by fracking in the US state of Colorado. Concentrations of carbon dioxide and methane as a function of latitude were studied by scientists under the leadership of André Butz on the German Polarstern research vessel during a journey from Capetown to Bremerhaven. The dataset obtained from these measurements made it possible to further refine the global GHG emissions model showing their worldwide distribution.

This year’s Week of the Environment is already the fifth edition of this event organized in the park of the Federal President’s office in Berlin since 2002. This year, 190 teams from all over Germany – selected from more than 600 – will present their environmental protection projects. Besides the exhibition, the event involves a framework program consisting of lectures and discussions, featuring top representatives from politics, business, science, and society.