What Makes the Spin Flip Over?

For the First Time, Researchers Formulate the Einstein-de-Haas Effect for Quantum Magnets – Publication in Nature Communications 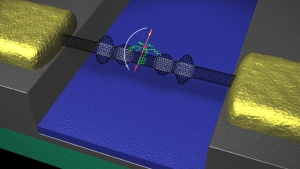 The mechanical properties of the carbon nanotube (black) cause the spin (orange) of a molecule (green and red) to flip over. (Illustration: Christian Grupe/KIT)

The Einstein-de-Haas effect shows that magnetism results from the angular momentum of electrons and is considered as the macroscopic evidence of electron spin. Researchers at Karlsruhe Institute of Technology (KIT) and at the Institut NÉEL at the CNRS in Grenoble were the first to investigate this effect for an individual spin and formulated it as the new “Quantum Einstein-de-Haas effect”. In the Nature Communications scientific journal (DOI: 10.1038/ncomms11443), they report on their work.

Quantum objects have properties that distinguish them significantly from macroscopic objects. Thus, electrons behave like tiny magnets where one pole points upwards. Under specific conditions, the spin may flip over with the effect that the particle changes its direction of rotation. At the beginning of the 20th century, scientists formulated the laws that describe the behavior of objects in quantum physics compared to objects in classical physics. In 1915, Albert Einstein, together with the Dutch physicist Wander Johannes de Haas, conducted an experiment where a magnetizable bar surrounded by an electric coil experiences a rotation when an electric current is applied. This observation proves that the generated magnetism is due to the intrinsic angular momentum, i.e. spin, created by the inherent electrons of the bar material. It is considered the macroscopic evidence of the electron spin and has been known as Einstein-de-Haas effect.

But what happens if the magnetic material, which consists of a large number of electron spins in the experiment described above, is reduced to a single spin – the spin of a quantum magnet? This question was addressed by the scientists of KIT and the Institut NÉEL at the Centre National de la Recherche Scientifique (CNRS) in Grenoble/France: They attached a magnetic molecule to a carbon nanotube and measured the current flowing through this arrangement while changing the external magnetic field. As the scientists now described in the Nature Communications journal, this proves the assumption that the reversal of the magnetic moment of the quantum magnet is determined by the mechanical properties of the carbon nanotube. “Only if the spin couples to a phonon carrying a suitable amount of energy, it can flip over,” explains Professor Mario Ruben, director of the workgroup on molecular materials at the KIT Institute of Nanotechnology (INT) and Institute for Inorganic Chemistry (AOC).

This correlation, which applies to quantum magnets in the nano-world, has now been formulated by the researchers as the new “Quantum Einstein-de-Haas effect”. One of the scientists involved, Professor Wolfgang Wernsdorfer, will return from the Institut NÉEL in Grenoble to Germany on June 1st this year and, funded by a Humboldt professorship, is going to set up a center for molecular quantum spintronics at the KIT that is absolutely unique so far. This center will facilitate future ground-breaking work in the fields of electronics, spin physics, and quantum computing at KIT. One of the goals is to build the first components of quantum computers – ultra-fast and energy-efficient computers that are based on magnetic molecules and core spins.