Predicting the 3D Structure of Biomolecules 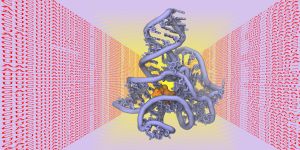 The spatial structure of biomolecules, such as proteins, DNA or RNA, determines their function as “molecular machines” in the cell. (Photo: Alexander Schug)

Without biomolecules no life: In each cell of an organism, legions of minute machines are working to e.g. transport oxygen, utilize nutrients, or repair damage of genetic information. Functioning of the molecular tool kit of the cell is determined by the spatial structure of these mini machines. Researchers of Karlsruhe Institute of Technology (KIT) have developed an effective method to predict the 3-dimensional structure of biomolecules by analyzing experimental data that can be obtained easily. This project was recently granted the Google Faculty Research Award.

How does life work on the molecular level? To answer this question that is of central importance to biology, pharmaceutics, and medicine, the 3-dimensional structure of biomolecules has to be known first. Biomolecules, such as proteins, DNA or RNA, are the molecular machines in the cells. They execute a variety of tasks, such as oxygen transport, muscle activity or the storage and execution of genetic information.

Functioning of these microscopically small machines is determined by their spatial structure. Certain proteins bind their “target substance” highly specifically, only because the latter perfectly fits to the active binding region of the protein, such as a key in a lock.

Meanwhile, experimental methods to determine the spatial structure of biomolecules have become rather elaborate, but they are still subject to technical restrictions.

The group of Alexander Schug of KIT’s Steinbuch Centre of Com-puting (SSC) has therefore developed an alternative approach. It is based on statistic analyses of large amounts of data of biomolecules from various organisms, which are easy to determine experimentally. Algorithms analyze these data for mutation patterns, on the basis of which the spatial structure can be predicted. This work was now granted the research award by Google.

“Our work is a good example of interdisciplinarity in modern research: We transferred methods from theoretical physics and computer science to a problem of molecular life sciences,” Alexander Schug says. “We hope that our detailed structural predictions will not only be of relevance to fundamental research, but also be applied in pharmacological and medical research, as biomolecules are important to a number of diseases.”