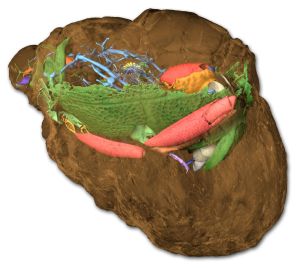 The layman considers fossil beetles just stones. Even experts were able to describe the rough, outer shape of the millimeter-sized fossils only. Using the ANKA synchrotron radiation source of KIT, 30 million year’ old beetles have now been examined in more detail. The inner anatomy was imaged in such detail that the family tree of the beetles could be analyzed. The results are published in the journal “eLIFE”. Hence, latest imaging methods can provide access to the enormous store of knowledge of unused natural history collections.

The beetles of a few millimeters in length come from a far more than hundred year’ old collection of fossil arthropods in Quercy, France, that was last studied in 1944. As the specimens are badly preserved on the outside, they have led a rather shadowy existence in the Natural History Museum of Basel since then.

Using modern imaging methods, scientists have now succeeded in obtaining detailed information about the inner structures of these beetles. The researchers subjected the fossils to X-ray microtomography at the ANKA synchrotron radiation source of Karlsruhe Institute of Technology (KIT). In this way, the innermost structures of the untransparent fossils were represented in a three-dimensional manner for the first time. “Measurement proper takes a few seconds only,” co-leader of the project, Thomas van de Kamp of the KIT Laboratory for Applications of Synchrotron Radiation (LAS) explains. During measurement, the object is rotated in the X-ray and examined from various directions. In the future, increasing automation of measurement is expected to allow for a quick examination and study of the anatomy of a number of specimens of natural history collections. After measurement, the three-dimensional object is reconstructed digitally, which is associated with a considerable expenditure. “Data processing and manual reconstruction require know-how of tomography as a tool and of the biology of the object examined.”

Thanks to the extremely good resolution of the tomography measurement station of the ANKA synchrotron radiation source, details of a few micrometers in dimension (millionths of a meter) in the beetle can be imaged. For the first time, this enables scientists to taxonomically describe the fossil beetle and evaluate its inner organs according to modern standards as if it was a specimen of a currently existing species. X-ray tomography of the fossil beetles thus revealed the mouth parts, throat, gastrointestinal tract, genitals, and the complex tracheal network. Then, a family tree analysis was made and relationships of the fossil species in the group of Clown beetles (also called hister beetles, histeridae), a beetle family still existing today, could be corrected and reevaluated.

The level of detail of the fossil beetle images by far exceeds the knowledge normally obtained about fossil arthropods. “The excellent preservation of the soft tissue shows that the beetles were preserved within a very short period of time, presumably within hours or days,” paleontologist Achim Schwermann of the Steinmann Institute of Bonn University and co-leader of the project says. One fossil beetle that is still embedded partly in the rock shows the structures of the exoskeleton. The adhering rock now reveals what the outside of the beetle looked like. Surprisingly, it is the externally worst preserved beetle that is best preserved inside. The adhering rock protected the inner structures and fragile limbs from being destroyed by external environmental impacts. “Never before have I seen the interior of a Clown beetle in such a detail,” Clown beetle expert Michael Caterino of Clemson University, South Carolina, USA, emphasizes.

After the fossil arthropods from Quercy, France, had been found to be badly preserved by a first analysis in the 1940s, this old collection has now turned out to be a true treasure trove. “This makes us scientists look at the old collections of museums and universities with different eyes,” Schwermann and van de Kamp say. Their team now plans to examine also other, similarly preserved fossils. The fact that the Quercy beetles have been left unnoticed for more than 70 years shows the high potential of old collections.

“Optimum adjustment of all components ensures an excellent imaging quality compared to medical computer tomographs,” Tomy dos Santos Rolo of the Institute for Beam Physics and Technology (IBPT) of KIT says. Synchrotrons are among the most intensive sources of X-rays and infrared radiation and of highest use for research in both science and industry. Their pulsed, polarized light enables unique insights into the world of biology, medicine, chemistry, and physics and can be used for the non-destructive analysis of materials and components planned to be applied in future facilities and machines. In facilities, such as ANKA (Angström Source Karlsruhe), synchrotron radiation is generated by the acceleration of fast electrons in magnetic fields.

Other press releases on this topic: