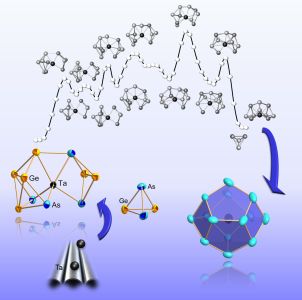 Step by step towards the complete shell: Formation of a metal cluster from the atomic constituents to the compound. (Photo: Dehnen Group, Philipps-Universität Marburg)

First the nucleus, then the shell: Researchers from Marburg and Karlsruhe have studied stepwise formation of metal clusters, smallest fractions of metals in molecular form. The shell gradually forms around the inner atom rather than by later inclusion of the central atom. Knowledge of all development steps may allow for customized optoelectronic and magnetic properties, as is reported by the researchers in the science journal “Nature Communications”. (DOI: 10.1038/NCOMMS10480)

To specifically synthesize chemical compounds, mechanisms responsible for their formation have to be known. “Purely inorganic compounds are a black box in this respect,” Florian Weigend of Karlsruhe Institute of Technology (KIT) and Stefanie Dehnen of Philipps-Universität Marburg, the corresponding authors of this study, explain. “This particularly applies to the formation of multinucleated metal complexes, so-called clusters.” Processes of transforming metal clusters take place rapidly. Normally, it is not possible to observe these processes and the intermediate products. “Even the very first steps are largely unknown and can only be identified by combining synthesis with measurement and computerized chemical modeling,” the experts say. If all development steps were known, metal clusters with finely adjusted optoelectronic and magnetic properties might be customized for technical applications.

In the study published now, the team reports the formation of a multinucleated metal cluster by first synthesizing a series of variably sized clusters of the metalloids germanium and arsenic. Larger clusters have an atom of the transition metal tantalum in the center of the cage molecules. Measurements and computer simulations suggest that the transition metal very early plays a role in cluster formation. “It may be considered a type of catalyst that initiates the formation and breaking of bonds,” Weigend and Dehnen point out. Altogether, the findings show that the transition metal does not settle into an earlier formed cluster shell, but that the shell of the cluster gradually forms around the atom in the center. ”The results can be generalized for a whole family of metallic cluster compounds,” Weigend and Dehnen say.

Apart from chemical syntheses and measurements in Marburg, extensive computer simulations with the largely KIT-developed quantum chemistry program package TURBOMOLE were made at KIT. In this way, the role of the many isomers in the reaction was determined. Isomers are chemical compounds of identical composition, but with different spatial arrangements of the atoms. “Thanks to the calculation of reaction paths, we have found that transformations of isomers are possible with a relatively small energy expenditure,” Weigend says.

Apart from Dehnen and Weigend and doctoral student Stefan Mit-zinger, the Humboldt scholarship holder Lies Broeckaert and Werner Masse, former Head of the Central Laboratory for Crystal Structure Analysis, are involved in the present publication. Underlying research was supported by the Alexander von Humboldt Foundation, Friedrich Ebert Foundation, and the German Research Foundation.