New Division Heads at KIT: Wilfried Juling and Volker Saile About to Retire 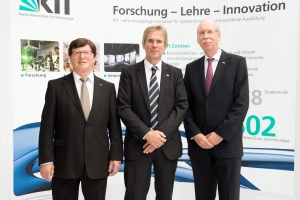 For many years now, both have been working at Karlsruhe Institute of Technology (KIT) and its predecessor institutions: Division Heads Professor Wilfried Juling and Professor Volker Saile came to the then University of Karlsruhe and Forschungszentrum Karlsruhe in 1998. As science managers, they were involved in the foundation and establishment of KIT. They will now retire on October 01.

“Today’s KIT doubtlessly bears the marks of Wilfried Juling and Volker Saile,” the President of KIT, Professor Holger Hanselka, says. “When establishing the KIT, both accomplished pioneer work and contributed enormously to the merger of both predecessor institutions. I would like to thank Mr. Juling and Mr. Saile very much for their high commitment and their great work.”

In 1998, Wilfried Juling was appointed Director of the Computing Center and Holder of the Chair for Computer Systems and Information Processing Infrastructure. As Managing Director of KIT’s Steinbuch Centre for Computing (SCC), he headed the newly established joint IT center from 2008 to 2010. From 2010 to 2013, he was Chief Science and Information Officer and member of the Extended Presidential Committee of KIT. Since 2014, Juling has been heading Division II – Informatics, Economics, and Society and continued to be CIO (Chief Information Officer) of KIT.

In 1998, Volker Saile was appointed Professor for Microstructure Technology and moved from the USA to the Department of Mechanical Engineering of the then University of Karlsruhe. In parallel, he headed the Institute of Microstructure Technology of Forschungszentrum Karlsruhe. After the merger in KIT, Volker Saile took over the position of a Chief Science Officer in the Extended Presidential Committee of KIT in 2010. Since 2014, he has been heading Division V – Physics and Mathematics.

After the retirement of Wilfried Juling and Volker Saile, two new Division Heads will be responsible for Divisions II and V of KIT:

Professor Johannes Blümer (Division V – Physics and Mathematics). Blümer is Professor of Experimental Nuclear Physics and has been heading the Institute of Nuclear Physics of KIT since 1999. Since 2008, he has been spokesperson of the KIT Elementary Particle and Astroparticle Physics Center and of the “Matter and Universe” Programme.

Professor h.c. Joachim Knebel continues to be Head of Division III – Mechanical and Electrical Engineering. Knebel has been heading this division since 2014 and was now reelected for an office term of five years.

Photos of the new division heads with KIT President Professor Holger Hanselka are available for download at www.kit.edu. 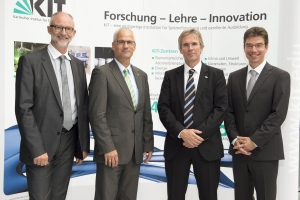 Overview – The Five Divisions of KIT

The five divisions of KIT serve to schematically organize research, education, and innovation of the institutes affiliated to them: I - Biology, Chemistry, and Process Engineering; II – Informatics, Economics, and Society; III – Mechanical and Electrical Engineering; IV – Natural and Built Environment; V – Physics and Mathematics. Upon proposal by a selection committee, the heads of these five divisions are elected by the division councils in agreement with the Presidential Committee. The office period is five years.

Elections were now held in Divisions II, III, and V. Divisions I - Biology, Chemistry, and Process Engineering and IV – Natural and Built Environment continue to be headed by Professor Doris Wedlich and Dr. Karl-Friedrich Ziegahn, respectively. Their terms of office have not yet expired.

Division II: Professor Michael Decker, born in 1965, studied physics with a minor in economics at Heidelberg University and was conferred his diploma in 1992. The doctorate followed in 1995. Decker was then member of the scientific staff of the German Aerospace Center (DLR) in Stuttgart and of Europäische Akademie GmbH. In 2003, he came to the Institute for Technology Assessment and Systems Analysis (ITAS) of KIT and was appointed its Deputy Director in 2004. In 2006, he was conferred his post-doctoral lecture qualification for a thesis on applied interdisciplinary research in technology assessment. Since 2009, he has been university professor for technology assessment at the KIT Institute of Philosophy. Since 2014, he has been heading ITAS. He is spokesperson of the Key Technologies and Innovation Processes Area of the Germany-wide programme “Technology, Innovation, and Society” of the Helmholtz Association and chairs the advisory council on “Innovation and Technology Assessment” of the Federal Ministry of Education and Research (BMBF), among others.

Division III: Professor Joachim Knebel, born in 1962, studied mechanical engineering at the then University of Karlsruhe and was conferred his doctorate in 1993. From 2010 to 2013, he was Chief Science Officer and Member of the Extended Presidential Committee of KIT. In addition, he was spokesperson of the Helmholtz Programme “Nuclear Waste Management and Safety” and of the interdisciplinary programme “Electric Mobility” of the Helmholtz Association. He is member of many bodies. Among others, he has been spokesperson of a Germany-wide working group on Fukushima since 2011. Since 2014, he has been heading Division III – Mechanical and Electrical Engineering. In December 2013, Joachim Knebel was conferred the title of Professor honoris causa by the State University of St. Petersburg for his contributions to the development of a future energy system and his support of Russian-European cooperation.

Division V: Professor Johannes Blümer, born in 1955, studied at the University of Dortmund and was conferred his doctorate for an experiment in neutrino physics at CERN/Geneva in 1985. He was conferred his post-doctoral lecture qualification in 1995 by Mainz University and accepted a position at CERN, where he was spokesperson of the “NA48” experiment to study the causes of asymmetry between matter and antimatter for two years. Since 1999, Blümer has been conducting research and teaching at Karlsruhe. He was involved in establishing the astroparticle physics research area and paved the way for KIT’s participation in the international large-scale projects of the Pierre Auger Observatory and KATRIN. He is programme spokesperson of the Helmholtz Association and works in the grants committee for collaborative research centers of DFG. At KIT, he established the KIT Elementary and Astroparticle Physics Center KCETA and the associated KSETA Graduate School together with numerous colleagues. In 2013, he was conferred the honorary doctorate by the Universidad Nacional de San Martin in Buenos Aires for the establishment of astroparticle physics in Argentina and for his support of young scientists.