Physicist Ioan M. Pop Is Granted One of the 2015 Sofja Kovalevskaja Awards of the Alexander von Humboldt Foundation in the Amount of up to EUR 1.65 Million and Establishes Own Working Group at KIT 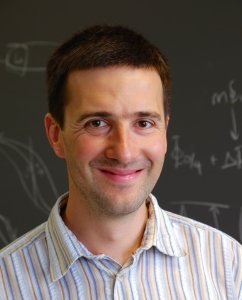 Physicist Ioan M. Pop is one of six international top-rank junior researchers receiving one of the highest endowed science awards in Germany, the Sofja Kovalevskaja Award 2015 of the Alexander von Humboldt Foundation. The junior researcher, who has been working at Yale University in the USA, will use the prize money of up to EUR 1.65 million to establish an own working group at Karlsruhe Institute of Technology (KIT). Ioan M. Pop studies quantum mechanics effects in superconducting circuits, which promise to lead to even faster computation processes.

The Alexander von Humboldt Foundation grants the Sofja Kovalevskaja Award funded by the Federal Ministry of Education and Research to international top-rank junior researchers aged from 31 to 33. With the prize money, they are given risk capital for innovative projects in the early phase of their careers. For a period of up to five years, they will conduct research at German universities and research institutions and establish own working groups. The award is named after the Russian mathematician Sofja Kovalevskaja, born in 1850.

Physicist Ioan M. Pop, who has been working at Yale University, USA, will use the prize money to establish an own working group at the Physikalisches Institut (PHI) of KIT. His host professor in Karlsruhe is Alexey Ustinov, PHI.

The award will be handed over to the six top-rank researchers selected by Federal Research Minister Johanna Wanka and the President of the Alexander von Humboldt Foundation, Helmut Schwarz, on November 17 in Berlin.

Quantum computers based on the laws of quantum mechanics promise to launch a new era of faster, more efficient information processing. These laws of the quantum world, however, are very different from those of classical physics with which we are familiar. For three decades now, physicists across the world have been exploring the potential use of quantum machines for information processing. During this time, there has been spectacular progress in both the theoretical understanding of quantum information processing and the realization of prototype physical platforms. Superconducting circuits are one the most promising technologies, one reason being that below certain temperatures they exhibit no electrical resistance and, hence, reach a high degree of quantum mechanics coherence.

Ioan Pop’s research is geared towards understanding and harnessing quantum mechanis effects in superconducting circuits. One example is the so-called Josephson effect which describes the flow of current between superconductors separated by an insulating barrier. At Karlsruhe Institute of Technology, Ioan Pop will attempt to develop topologically protected superconducting circuits, which could take us one step closer to the implementation of quantum information processing.

Ioan M. Pop was born in 1983 in Romania and studied physics at the Babes-Bolyai University in Cluj-Napoca, Romania, from 2002 to 2006. In 2007, he received his master’s degree in material science and attended a Ph.D. program in physics at the Institut NÉEL, Centre National de la Recherche Scientifique (CNRS) and Université Joseph Fourier in Grenoble, France, where he was conferred his doctorate in 2011. Since then, Ioan M. Pop has been working as a post-doctoral researcher at Yale University, USA. He has received several honors, including a fellowship of the French Ministry of Higher Education and Research and the 2012 Thesis Prize of the French Fondation Nanosciences.