On the Way towards New Storage Media

Switchable Nanostrips: Spin Transition May Be Applied in the Form of Ordered Crystalline Microstructures 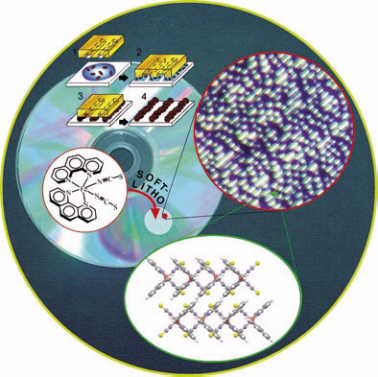 Switchable nanostrips: Spin transitions (bottom) may be printed as strips onto silicon wafers by stamping techniques. Even logical patterns of a recorded CD may be copied to the strip pattern.
(Photo by: Forschungszentrum Karlsruhe)

In our information age, increase in storage capacities is a central challenge of science and technology. A German-Italian team of researchers is pursuing the concept of “nanostructured storage domains”. Scientists in the team of Mario Ruben from the Karlsruhe Institute of Technology and Massimiliano Cavallini from the National Research Council (CNR) reported in the Journal of Applied Chemistry that they succeeded in producing reliable nanopatterns of a so-called spin transition on silicon oxide chips. This is a decisive step towards a new generation of molecular storage media, in which binary data are stored by the “switching” of electron spins.

Current computer hard disks store data by magnetizing the surface of a rotating disk. Each “storage cell” has an “address”, such that the stored data may be accessed directly. To increase the storage capacity, the individual magnetizable areas are constantly reduced in size. However, the limits will be reached soon. Due to thermal excitation, some of the magnetic particles occasionally topple into the other direction. In case of very small domains, the complete cell may rapidly lose its magnetization. Then, the stored information is lost.

To reach higher information densities, it is possible to use other switchable properties, for example, the transition between two spin states. Iron (II) compounds, for instance, may exist in a high and a low spin state. “Switching” (flipping) between these two states may be caused by temperature, pressure, and electromagnetic radiation.

The data store, however, does not only need two distinguishable states for 0 and 1, but also an unambiguous “address” for each storage cell that can be identified by the optical writing and reading units of the computer. For this purpose, an “interface” is needed that brings the nanoscopic spin state transitions of the molecular switching units in line with the microscale system periphery. This may be achieved, if the spin transition can be copied into a highly ordered micro- and nanostructure.

With the help of special unconventional micro- and nanolithographic methods, the team of researchers succeeded in “printing” a neutral iron (II) complex in the form of finest lines onto a silicon wafer. In a self-organization process, the nanocrystals preferably orient along the line. In addition, the scientists succeeded in copying the pattern of a recorded CD into a film of the iron compound. In this way, it was demonstrated for the first time that it is possible to generate legible logical patterns with a spin transition. Present work is concentrating on writing and reading out these nanostructures under room temperature conditions for future applications.