Particles and Forces in the Universe 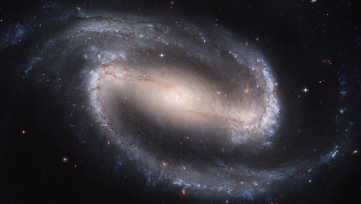 View into the universe: KCETA will present its main activities (Photo by: NASA)

The smallest particles of matter are in the focus of research conducted by the Center for Elementary Particle and Astroparticle Physics (KCETA) of the Karlsruhe Institute of Technology. Within the framework of the series “KIT im Rathaus” (KIT at the city hall), KCETA will introduce itself to the public in the Bürgersaal of the Karlsruhe city hall on Tuesday, December 09, 18.30 hrs.

KCETA bundles experimental and theoretical research and education at the interface of astronomy, astrophysics, elementary particle physics, and cosmology. International large-scale fundamental research projects are starting point and common ground of the large variety of activities. The KIT Center represents a platform to study the smallest components of matter, their interactions, and their role in the formation and development of largest structures of the universe. In September, this topic was in the focus of public interest when the European organization for nuclear research CERN (Conseil Européen pour la Recherche Nucléaire) at Geneva started the LHC particle accelerator. Among others, this experiment is aimed at simulating the Big Bang.

The lord mayor of Karlsruhe, Heinz Fenrich, and the members of the KIT Executive Board, Professor Horst Hippler and Professor Eberhard Umbach, invite all citizens of Karlsruhe to attend. Pupils interested in studying at the university are particularly welcome. The presentations will be followed by a reception in the upper entrance hall of the city hall. Visitors are invited to discuss and visit the KCETA exhibition. This exhibition will take place from December 08 to December 10.

“KIT im Rathaus” succeeds the events of “Universität im Rathaus” (university at the city hall), in which faculties of the Universität Karlsruhe presented their activities in the past years. Now, the centers, focuses, and areas of competence of KIT research will introduce themselves. In the past summer semester, the KIT Energy Center started this series. The events are coordinated by the ZAK | Center for Applied Cultural Science and Studium Generale.

Welcome Addresses
Heinz Fenrich, Lord Mayor of the City of Karlsruhe
Professor Detlef Löhe, Vice-president for Research of the Universität Karlsruhe (TH), Member of the Executive Board of Forschungszentrum Karlsruhe GmbH

The Large Hadron Collider of CERN: Tracking the Big Bang
Professor Dr. Thomas Müller, Head of the Institute for Experimental Nuclear Physics of the Universität Karlsruhe, Spokesman of the Area of Competence of Elementary Particle Physics and Astroparticle Physics