Why Friction Depends on the Number of Layers 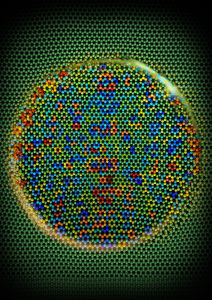 Based on simulations, friction properties of the two-dimensional carbon graphene were studied by scientists of Karlsruhe Institute of Technology (KIT) in cooperation with researchers of the Fraunhofer Institute for Mechanics of Materials IWM and scientists in China and the USA. In contact with monolayer graphene, friction is higher than in case of multi-layered graphene or graphite. Moreover, friction force increases for continued sliding. The scientists attribute this to the real contact area and the evolving quality of frictional contact. They report their results in the journal Nature. (DOI: 10.1038/nature20135)

When interfaces of solids are in contact and move in opposite directions, friction occurs. Energy is converted into heat that is lost unused. In addition, friction causes erosion and wear. To reduce friction for metallic sliding elements and high contact pressures, e.g. in automobiles or industrial machines, substances of lamellar structure are frequently used as dry lubricants, as their particles easily slide on each other.

One of the most widely applied dry lubricants is graphite, a natural form of carbon with a three-dimensional, layered structure. Graphite theoretically consists of several layers of graphene that are stacked on top of each other with a slight offset. Graphene is a modification of carbon with a two-dimensional structure: It consists of only one layer of carbon atoms that are arranged in hexagons similar to honeycombs. In nature, graphene does not exist as an isolated monolayer material, but it can be produced by several methods.

Experiments have shown that monolayer graphene exhibits higher friction than multilayer graphene or graphite and that friction increases with continued sliding. So far, the reasons have not yet been understood. Scientists of the Institute for Applied Materials (IAM) and the Institute of Nanotechnology (INT) of KIT, together with researchers of the Fraunhofer Institute for Mechanics of Materials IWM in Freiburg, Xi’an Jiaotong University/China, Tsinghua University in Beijing/China, Massachusetts Institute of Technology/USA, and the University of Pennsylvania/USA, reproduced the experiments by atomistic simulations and obtained new findings with respect to layer-dependent friction and the increase in friction force for graphene. Their results are presented in the journal Nature.

In the simulations, the scientists made a silicon tip slide over graphene applied onto an amorphous, i.e. non-crystalline, silicon substrate. Previously, it had been assumed that friction between interfaces depends on the true contact area – the number of atoms within the range of interatomic forces - and increased friction of monolayer graphene had been attributed to the larger true contact area. The scientists of KIT and their colleagues now found that apart from the true contact area, also the evolving contact quality is important.

Due to its increased flexibility, the thinner and less constrained monolayer graphene tends to readjust its configuration. Carbon atoms more strongly adhere to the atoms of the silicon tip and exhibit an increased synchronicity in their stick-slip behavior. Contacts on the atomic scale increase quantitatively in terms of the contact area and qualitatively in terms of friction force. “Our concept of evolving contact quality can be used to explain why friction of interfaces of a less constrained structure changes with time,” Dr. Suzhi Li of IAM – Computational Materials Science of KIT, explains.