KIT 16e Is Overall Winner at the Hockenheim Ring 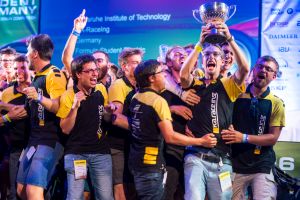 The first overall win on “home ground:” With its “KIT 16e” electric racing car, the KA-RaceIng students’ team of Karlsruhe Institute of Technology (KIT) won the Formula Student Germany last weekend (August 12 – 14, 2016). The competition at the Hockenheimring comprised eight categories. 39 teams of students from all over the world took part.

“We are very happy. For us, the race at the Hockenheimring is the most important competition of the season!,” says Joseph Suppanz, organization manager of the KA-RaceIng team. We have been among the top teams for a long time. Our first overall win in this ‘home game’ is great.”

In the 2016 Formula Student Germany, the teams competed in eight categories. The KIT 16e racing car won two different driving disciplines: In “AutoX”, the racetrack consists of straight sections, hairpin curves, chicanes, and slalom sections. “SkidPad”, also called “figure 8 racing,” is about lateral acceleration. In addition, the car reached second places in the endurance test and in energy efficiency. Moreover, good rankings in static disciplines outside of the racetrack, such as in the presentation of the business plan and the design, contributed to the success. In the overall ranking, the KIT team was followed by the teams of TU Delft and Stuttgart University.