There Is No Border to Thinking

Official Opening of the European Campus – New Dimension of Cross-border Cooperation of Germany, France, and Switzerland 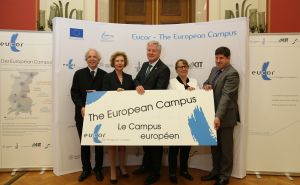 Karlsruhe Institute of Technology (KIT) and the universities of Basel, Freiburg, Haute-Alsace, and Strasbourg have established the first European university alliance that provides the five universities with the opportunity to act jointly. During a ceremony at the Palais universitaire in Strasbourg, the universities officially opened “Eucor – The European Campus” on Wednesday, May 11, 2016.

“Opening of the European Campus is another important step in the cooperation of Germany, France, and Switzerland and the crystal nucleus of a joint scientific area on the Upper Rhine,” the President of KIT, Professor Holger Hanselka, says.

“For many years, now, we at KIT have been cooperating across borders with French and Swiss universities and research institutions,” KIT Vice President for Innovation and International Affairs, Professor Thomas Hirth, emphasizes. “Our goal in establishing the European Campus is to create a new platform for this cooperation in research, teaching, and innovation as a means of consolidating our position in international competition for smartest minds and ideas.”

The European Campus is a first European grouping of territorial cooperation (EGTC) organized and managed by universities alone. This grouping can now act as a single legal entity. The partner universities retain their autonomy, but are enabled to develop a common research and teaching strategy and to establish cross-border structures for science in the Upper Rhine region under Eucor – The European Campus. The cross-border alliance has elected Professor Dr. Hans-Jochen Schiewer, Rector of the University of Freiburg, as its first president for the next three years. His deputy is Professor Andrea Schenker-Wicki, Rector of the University of Basel. Janosch Nieden, former Eucor coordinator, was appointed Managing Director.

During the opening ceremony, Dr. Carlos Moedas, European Commissioner for Research, Science, and Innovation, held the ceremonial speech. He then discussed the expectations and challenges facing the European Campus with Thierry Mandon, French Secretary of State for Higher Education and Research, Dr. Simone Schwanitz, Director of the Baden-Württemberg Ministry of Science, Research, and the Arts, Joakim Rüegger, Director of Higher Education at the Department of Education of the Canton Basel-Stadt, Professor Luisa de Cola, holder of a double professorship at the University of Strasbourg and the KIT, and Audrey Dujardin, graduate of the binational degree program Regio Chimica of the University of Upper Alsace and the University of Freiburg.

Comments on the Opening of the European Campus

Professor Hans-Jochen Schiewer, President of Eucor – The European Campus and Rector of the University of Freiburg

“We are celebrating a historical step for the European science and research community today. After a year of preparations, I am looking forward to working with our partners in France and Switzerland to give concrete shape to the European Campus and develop unique opportunities for cooperation among the employees of the Upper Rhine universities.”

Professor Andrea Schenker-Wicki, Vice President of Eucor – The European Campus and Rector of the University of Basel

“With its five universities in three countries, the Upper Rhine region offers a unique constellation: The students receive easy access to other universities in neighboring countries and also get to experience other cultures. In an increasingly globalized environment, that is an important precondition for understanding the world we live in. The same applies to our researchers. The European Campus promotes internationalization at the participating universities without forcing them to lose their local identities.”

Professor Alain Beretz, President of the University of Strasbourg

“The European Campus is more than just a unique and innovative instrument for enabling the universities in the three countries to cooperate freely with each other and for removing boundaries for students and researchers. Above all, it also demonstrates that we are building up the Europe of tomorrow at the university.”

Dr. Christine Gangloff-Ziegler, President of the University of Upper Alsace

“Robert Schumann, the father of Europe, called himself a “person from the border.” The five universities of Eucor – The European Campus refer to the statutes of the European Council and that they contribute to making the members into a unified whole in order to preserve and promote the ideals and principles that constitute their common legacy and to further economic and social progress in Europe and on the Upper Rhine. This causes the borders to become blurred and turns our differences into a source of enrichment and strength.”

Dr. Simone Schwanitz, Director of the Ministry of Science, Research, and the Arts of Baden-Württemberg

“The European Campus will link the potentials and competencies of five strong universities across borders and enable them to grow together to form a single science and research network with an international reach. Baden-Württemberg stands to profit greatly from these synergies as a center for internationally recognized top-level research.”

Joakim Rüegger, Director of Higher Education at the Department of Education of the Canton Basel-Stadt

“Science is hit particularly high by the tendency of political powers to attempt to disconnect themselves from what is happening in the rest of the world. This is not just about access to research funding. The point is rather to place researchers working in Switzerland, some of them come from Europe, on an equal footing with other colleagues from their disciplines. Students, too, are dependent on international prospects, if they want to succeed on the regional and global labor market. We aspire to international visibility and a position at the forefront of development for our university. It is therefore important that two cantons responsible for the University of Basel are using the opportunities presented by “small-scale foreign policy” to open up this gate to Europe.