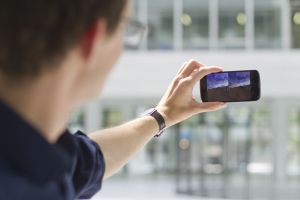 Innovative telecommunication products result from a competition of ideas on the market. Here, the “Optonaut” 3D photo app with community interface made by KIT students is shown. (Photo: KIT)

Smartphones and tablets come from Asia and the USA, German and European industry is far behind. The causes are dealt with by a study of KIT published in the journal “Telecommunications Policy”. According to this study, risk aversion made the companies offer own data services at a high price instead of using the open internet. Competitive pressure by Europe-wide granting of mobile telephone licenses or the deregulation of the radio spectrum might improve the situation. Computers protected against the manipulation of data also open up market chances.

“While US companies, such as Apple and Google, dominate the consumer market, European companies in the information and communication technologies sector, such as Nokia or Siemens Communications, are irrelevant today,” co-author Arnd Weber of KIT’s Institute for Technology Assessment and Systems Analysis (ITAS) says. According to the study, this loss of relevance was caused by repeated attempts of European suppliers to oligopolistically market communication capacities in closed environments instead of using the open internet, as it is done by US companies. In the mid-1980s, for instance, manufacturers and network operators tried to push the closed system “Bildschirmtext” (videotex) with a payment per page. US modems, by means of which any server could be accessed, were excluded from the market. This strategy was continued in the late 90s: Already when the mobile internet emerged, did European companies try to sell expensive services, such as SMS, MMS, and applications of the Wireless Application Protocol (WAP).

Furthermore, the authors of the study criticize the establishment of a competition-reduced market in Europe. It exclusively relied on the GSM mobile radio standard developed by European companies and ignored cheaper technologies, such as the PHS standard applied in Japan and China at that time. “A monopolistic tradition regularly blocked innovations in Europe, with expensive technologies being marketed instead. This strategy did not only go at the expense of the customers, but ended up in the decline of European information and communication technologies (ICT) suppliers in the long term. Willingness to search for new, cheaper or more flexible technologies was lacking,” Weber summarizes.

Another reason for the decline is the fact that Europe is lacking the capacity to search for new ICT markets and to commercialize large series of new products. This does not only apply to smartphones. PCs with graphic user interfaces might have been a European product already. First devices of this type were manufactured in Switzerland in 1980, four years before Apple’s Macintosh. But the banks were afraid of investing in production.

“European investors did not only sleep through new developments, as is pointed out in particular by UK and US media. It is even worse. For more than 20 years, they have known novel, attractive products, but did not take the risk of investing in their manufacture. Instead of offering the open internet and high-performance computers, they supported the attempt to sell individual, more or less attractive data services and relatively simple end devices at high costs,” Weber says. The result: Contrary to automotive industry, where strong competitors have established and flexibly react to the Japanese market leader Toyota with high investments, European manufacturers of computers and mobile phones are now irrelevant.

In the opinion of the authors of the study, recovery of European manufacturers would require investors and managers with a feeling for successful innovations. As in other branches, competitors are needed which surprise each other. “There are still many competences in the ICT sector in Europe, and also much capital,” co-author Daniel Scuka, mobile communications expert of the Japanese consulting company Mobikyo, says. “Competition might be enhanced by granting Europe-wide licenses to mobile operators. In this way, internationally competitive companies would be given more power than manufacturers of mobile devices. This power could then be used to market new services, such as cost-free communication over large distances through improved WiFi, or to launch something completely new and not even thought of now,” Scuka says.

Another market opportunity lies in eavesdropping-proof and complete communication between computers and smartphones. If there were legal regulations and standards for highly secure computers without any loopholes similar to safety regulations for airplane construction or in medicine, this might be advantageous for Europe. “Security made in Germany” might then be in demand worldwide. “In the past years, media reported a lot about the hacking of company servers,” Arnd Weber explains. “Here, countermeasures may be taken and profitable markets might be created for ICT companies. The USA have already started doing  this by using unhackable computers for military purposes.”

More on the Optonaut app made by KIT students: