Extension of AIDA Facility: KIT Scientists Study the Influence of Aerosols on Climate, Weather, and the Environment 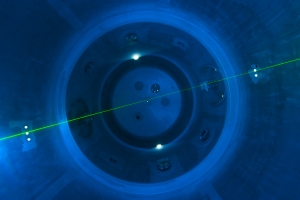 From light, airy, and spotless white to threatening and grey-black: Clouds are encountered in various forms. At the AIDA “cloud chamber”, scientists of Karlsruhe Institute of Technology (KIT) study how clouds form and which influence they have on weather and climate. The modernized facility and the new extension building AIDA-2 on Campus North were opened officially today. The celebration also marked the start of an international measurement campaign focusing on the investigation of ice-nucleating aerosols. These smallest particles influence the formation of clouds and precipitation.

Aerosols are smallest suspended particles originating from a variety of natural and anthropogenic sources. Most of them act as condensation nuclei for the formation of water droplets in clouds, which freeze at about -35°C. “Only a very small fraction of the particles, such as dust particles, make the water droplets freeze slightly below 0°C already. Formation of these ice nuclei frequently is responsible for the formation of precipitation. Hence, this process is of essential relevance to better forecasts of the spatial and temporal distribution of precipitation,” Professor Thomas Leisner, Head of the Institute of Meteorology and Climate Research – Atmospheric Aerosol Research Division (IMK-AAF), says.

The extent to which ice particles are nucleated by which aerosol particles is studied in experiments at the worldwide unique AIDA facility (AIDA is the acronym for Aerosol Interaction and Dynamics in the Atmosphere). For these experiments, the facility has now been extended: “At the novel dynamic cloud chamber AIDA-2 that will be set up in the new building this year, we will be able to study more flexibly and comprehensively ice formation and precipitation development in warmer clouds,” explains Dr. Ottmar Möhler, who heads the Aerosol-Cloud-Processes group of IMK-AAF. Under the AIDA-2 scientific investment program, the new building was constructed in the past two years for accommodation of the new cloud chamber AIDA-2. In early 2016, it is planned to start operation parallel to the already existing AIDA facility. In contrast to the existing plant, the cloud chamber proper is located inside a vacuum vessel, in which pressure drop of ascending air parcels can be simulated. Air pressure inside the cloud chamber is reduced parallel to the pressure in the external vessel. “The air cools down and clouds develop. During the AIDA-2 experiments, we will actively cool down the walls of the cloud chamber in order to reach a highly homogeneous temperature distribution. In this way, clouds can be simulated and observed over a larger temperature range and a much longer time,” Möhler says.

With the help of the future experiments at AIDA-2, the cloud researchers of IMK hope to obtain new insights not only into the formation of clouds and precipitation, but also into new details of the nucleation and growth of ice particles in cirrus clouds, which have a major impact on the climate system of the earth.

Formation of ice particles in clouds is in the focus of the large international measurement campaign FIN-2 that starts parallel to the opening of the AIDA-2 extension building. FIN-2 stands for the second part of an international test series comprising three parts: The Fifth International Ice Nucleation Workshop deals with ice-nucleating aerosol particles or INPs. “This subset of atmospheric aerosol particles is very small and, hence, difficult to measure. In the past years, existing instruments were improved, new measurement methods were developed, and new instruments were designed,” Ottmar Möhler points out. The AIDA test facility thus represents an internationally acknowledged platform for tests and comparisons of these new mobile instruments measuring the INPs. 23 teams of scientists from Europe and the USA take part in the current FIN-2 measurement campaign. In close cooperation with cloud and climate modelers, the impact of INPs on cloud, weather, and climate shall be analyzed.