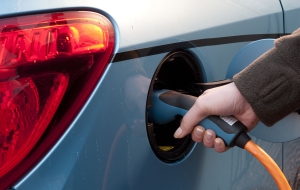 Smart integration of electric cars into the energy system might contribute to the energy turnaround. (Photo: Martin Lober, KIT)

The transportation sector has the capacity to nearly halve its CO2 emissions by 2050 and, hence, to contribute far more than previously thought to mitigate greenhouse gas emissions. Realizing this would require further efficiency improvement and, especially, promotion of public transport in cities, alongside with a large-scale shift to electric cars. These are key findings of a study, in which Karlsruhe Institute of Technology (KIT) was one of the partners and which is now published in the journal “Science”.

Limiting global warming to less than two degrees compared to the pre-industrial level is the defined objective of international climate policy. But this two-degrees target can only be achieved, if emissions of greenhouse gases, such as CO2, are reduced considerably in the long term. At present, emissions of the transportation sector already account for 23% of global energy-related CO2 emissions. According to IPCC estimates, transport emissions are even expected to double by 2050 due to rapid motorization in China, India, and Southeast Asia. And: If other areas, such as the energy sector contribute less to CO2 reduction, the transportation sector has to make an even larger contribution.

In their study “Transport: A roadblock to climate change mitigation?” reported in the journal “Science”, scientists led by Dr. Felix Creutzig from the Mercator Research Institute of Global Commons and Climate Change (MCC), Berlin, and Dr. Patrick Jochem, KIT, point out that the transportation sector may be easier to decarbonize than previously assumed in global emission scenarios. Prior to the UN Climate Change Conference in Paris, the researchers from Germany, Austria, and the Netherlands point to a promising avenue for the transport sector to mitigate climate change. This would require a large-scale shift to electric mobility and promotion of public transport in cities. “Large-scale electric mobility could be crucial to halving CO2 emissions of the transport sector by 2050,” lead author Felix Creutzig says. He emphasizes that electric mobility on this scale includes car-sharing concepts, electric bicycles, and rail transport. “Efficiency gains will be very difficult to achieve with the conventional automobile fleet from 2025 on. A fuel shift will be the only remaining option to advance decarbonization.”

“Electrification of cars may also contribute to the energy turnaround, provided that electric vehicles are integrated smartly into the energy system,” Patrick Jochem of the KIT Institute for Industrial Production (IIP) and member of the World Conference on Transport Research Society (WCTRS) explains. “Shifting of charge processes to strong-wind hours might relieve the energy system and, hence, create synergies between both sectors.”

According to the study, electric drives have a better starting position than engines running on biofuels or hydrogen, given the unforeseen continuing drop in battery prices. In fact, the price per kilowatt-hour of electricity from batteries has more than halved from 2007 (about US$ 1000) to 2014. Because of this development, prices for the year 2030 are now projected to drop to less than US$ 200 instead of US$ 325 per kWh. In parallel, decarbonization of electricity production will enhance the reduction of greenhouse gas emissions of electric mobility.

The study was based on scenarios of the Intergovernmental Panel on Climate Change (IPCC) and on the “Integrated Model to Assess the Greenhouse Effect” (IMAGE). While large-scale climate research models offer a systems view of what the transport sector, for example, could contribute to climate protection in comparison to the energy sector, the study presented in “Science”, however, examines transport-related issues within the sector by using more recent and more specific data on how people commute and travel.

In the opinion of the authors, climate protection solutions in the transport sector will significantly depend on infrastructure policy. Infrastructure investments in new train tracks or fast-lane bicycle paths, for example, might not only reduce the emission of greenhouse gases, but also decrease costs in other areas, because less roads and parking lots have to be built. The scientists hope that such investments would also cause positive changes of habits: For example, when parking is made more expensive in downtown areas, accompanied by an improvement of public transport, people might tend to give up driving and use other forms of transportation not just once, but for a longer time.