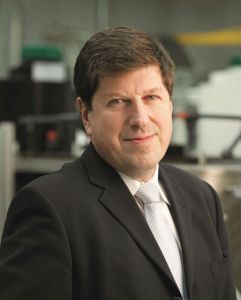 With an overwhelming majority of votes the KIT Senate today confirmed the unanimous decision by the Supervisory Board to elect Professor Thomas Hirth new Vice President for Innovation and International Affairs of the Karlsruhe Institute of Technology (KIT). Confirmation by the KIT Senate is a further procedural step. It will be followed by final negotiations of terms and conditions and by the appointment procedure; only after the signing of the contract, the KIT will have a new Vice President for Innovation and International Affairs. Thomas Hirth is recognized as an expert for bioeconomy and sustainable production who knows both the science system and the market.

Thomas Hirth has been head of the Stuttgart Fraunhofer Institute for Interfacial Engineering and Biotechnology and professor and head of institute at the University of Stuttgart since 2007 as well as member in the Presidential Committee of Fraunhofer Gesellschaft since 2012. Assuming office as a Vice President at KIT, the 53-year-old science manager returns to his alma mater: Hirth studied chemistry at and received his PhD from Universität Karlsruhe.

Supervisory Board Chair Professor Renate Schubert welcomed the vote of the KIT Senate: “The Supervisory Board unanimously expressed itself in favor of appointing Mr. Hirth future Vice President for Innovation and International Affairs. Professor Thomas Hirth is an extraordinary personality and an excellent representative of the KIT who is able to respond to the global challenges by building a bridge between science and industry while being focused on the importance of internationalization in the area of teaching.”

“This clear confirmation by the KIT Senate is a strong signal,” President of the KIT Professor Holger Hanselka says. “Thomas Hirth is an ideal choice, both professionally and personally. Today, it is more important than ever that successful research results are rapidly turned into marketable products. As a matter of fact, the great social challenges – just think of the Energiewende – can only be tackled through intensive dialogs between science and industry.” According to Hanselka, the KIT with approximately 500 industrial projects annually today already assumes a top position. “In view of the fact that the major issues of the future are of global nature, the KIT with a Vice President for Innovation and International Affairs is optimally positioned for the coming years.”

“I am very grateful for the immense confidence shown by the KIT committees. The KIT is a unique institution combining a university and large-scale research center”, says Professor Thomas Hirth. “Together with the employees at KIT and in dialogs with industry, my aim is to find good strategies and ways of introducing findings from research to the market in the best way possible. Another focus of my work will be to enhance KIT’s international prominence, especially in view of the global competition among research institutions. I am particularly pleased that this exciting challenge brings me back to Karlsruhe.”

The term of office of the Vice President for Innovation and International Affairs is six years from the date of appointment. January 1, 2016 is envisaged as the start of activity.

Thomas Hirth was born in Michelbach/Rastatt in 1962. He studied chemistry at Universität Karlsruhe, one of the predecessors of the KIT, and then graduated in Karlsruhe at the Institute of Physical Chemistry and Electrochemistry. From 1992 to 2007, Thomas Hirth worked at Fraunhofer Institute for Chemical Technology ICT in Pfinztal, holding different positions from postdoctoral research fellow to product manager for environmental engineering. In December 2007, he moved to Stuttgart to become the Director of Fraunhofer Institute for Interfacial Engineering and Biotechnology. Since 2008, he in addition has been professor at the University of Stuttgart and head of the Institute of Interfacial Process Engineering and Plasma Technology. Since 2012, Thomas Hirth has been vice-dean of the Faculty of Energy-, Process-, and Bio-Engineering at the University of Stuttgart. Since January 2012, he has been member of the Presidential Committee of Fraunhofer Institutszentrum Stuttgart. Moreover, he is scientific coordinator of the BioEconomy Leading-edge Cluster and took over the presidency of the steering committee in the research program “Bioökonomie Baden-Württemberg” in 2014. Since early 2013, Thomas Hirth has been presiding over the Renewable Energies Advisory Board at KIT.