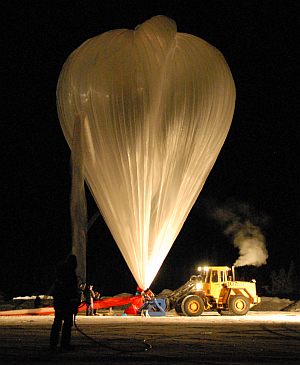 For the first time, KIT scientists have successfully measured in the ozone layer the chlorine compound ClOOCl which plays an important role in stratospheric ozone depletion. The doubts in the established models of polar ozone chemistry expressed by American researchers based on laboratory measurements are disproved by these new atmospheric observations. The established role played by chlorine compounds in atmospheric ozone chemistry is in fact confirmed by KIT’s atmospheric measurements.

The ozone hole above the Antarctic and the destructive role of chlorofluorocarbons (CFC) and their decomposition products have become a synonym of both global environmental problems and their solution by concerted agreements worldwide. Scientific fundamental research into ozone chemistry of the atmosphere was the basis of international agreements, such as the Montreal Protocol of 1987, which has put limits on CFC production. The success of the political implementation of these scientific findings is reflected by the fact that the chlorine content of the atmosphere and, hence, the ozone destruction potential recently started to decrease slowly.

For the first time, scientists from the Institute for Meteorology and Climate Research (IMK) have detected using atmospheric infrared measurements the important, but rather unstable chlorine monoxide dimer (ClOOCl) that plays a central role in stratospheric ozone destruction at the end of the Arctic winter. During the polar winter after sunrise, ClOOCl rapidly forms atomic chlorine which may catalytically decompose ozone. The extent of ClOOCl decay caused by the short-wave sunlight determines the extent of stratospheric polar ozone decomposition.

However, understanding of the processes involved in ozone-destroying atmospheric chlorine chemistry was questioned by laboratory measurements of American scientists (F. Pope et al., J. Phys. Chem. A, 111, 4322-4332, 2007). According to them, the decay of ClOOCl caused by sunlight is smaller than the decay calculated by other working groups. This would also imply weaker ozone decomposition. However, stratospheric chemistry models were found to significantly underestimate the ozone decomposition using these laboratory measurements. Hence, understanding of the ozone destruction processes in general was questioned.

“The atmosphere measurements made by KIT scientists above Northern Scandinavia with the balloon-borne infrared spectrometer MIPAS-B at heights of more than 20 kilometers clearly disprove the doubts of the American scientists and confirm the existing models of polar ozone chemistry,” underlines Dr. Gerald Wetzel, member of the IMK staff. “Measurement and evaluation of balloon spectra require a very close cooperation of engineers and scientists, without which these important results would not have been possible.”