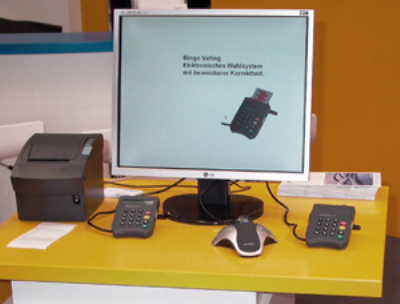 Making elections safer: By Bingo Voting, the voter is given a confirmation
of receipt of his vote
(Photo by: Universität Karlsruhe)

Whoever votes in an election has to trust in his vote being counted correctly by the voting machine. So far, no confirmation has been issued. Now, 100% correct counting of the vote is confirmed by Bingo Voting, a new voting method developed by the European Institute for Systems Security (EISS) of the KIT. Bingo Voting works in such a convincing manner that the team headed by Dr. Jörn Müller-Quade was awarded the German IT Security Award of the Horst Görtz Foundation.

The IT security award that carries a value of EUR 100,000 was a big surprise for the team. “We have applied for the award, because we were very enthusiastic about Bingo Voting”, says Müller-Quade, who tested the voting method during the students’ parliament elections in spring in Karlsruhe already. “We really did not expect to win.”

Bingo Voting issues a print-out to the voter after voting on a voting computer. The voter can then check whether his vote was counted correctly. The receipt issued in the booth can only be read by the voter himself. The major component is a random generator that can be protected against manipulation much more efficiently than a computer. “Everything corresponds to a normal voting process and the voter is not irritated by security mechanisms”, explains Müller-Quade. Those, who are not interested in the confirmation of correct counting of the vote, may simply ignore it. “Certainty that the vote is counted correctly enhances the people’s trust in democracy”, says Dr. Jörn Müller-Quade, who developed Bingo Voting together with five scientists over a period of two years.

The team of researchers now wishes to use the prize money for the further development of Bingo Voting up to maturity.